It's Time Pawlenty Moves To La-La-Land

It's beyond time that Minnesota's Governor Pawlenty move on...he obviously is using the office of Governor to campaign for US President, and in of itself, that would be acceptable IF HE DID HIS JOB! But several years ago, Pawlenty bailed on Minnesota. He balanced the budget by future service cuts and future high interest loans that will come due when ...you know, HE WON"T BE AROUND TO SEE THE PRICE MINNESOTANS PAY. 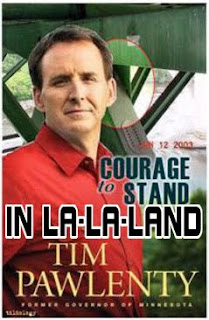 Then Timmy decides we don't need federal dollars. WTF!? The reason I pay taxes is for the services they provide my community...if YOU don't accept federal dollars, I still pay the same amount! How about this Mr. Never Around Governor Pawlenty, YOU OPT OUT! Yes, you heard me, quit, leave, excuse yourself, and just go away.
It's not like you will be missed. You are running for higher office and could care less about the people in this state. Why else would the Star Tribune today say you rejected more money for programs (sigh) again. Enough already, we want help and we want services. I don't give a fig about your ideology but I do care for Minnesota and really enough is enough. It's time for you to move off to the La-la-land of your world where no one pays taxes, and you can drown government in a bath tub, and there is no paved roads and bridges fall down, children go to bed hungry, and education is solely for those few who can afford it.
Oh an one more thing Mr. NO TAX Pawlenty, while there is plenty of studies that show teen pregnancy prevention works...there is also plenty of studies that show abstinence-only doesn't work!

"The Cochrane folks studied 13 abstinence-only education programs – they could not find one that showed an “enduring effect” on teen’s sexual behavior."

"In addition to the Cochrane study, another federally funded study of four abstinence-only programs by the Mathematica Policy Research Inc., published in April of 2007, revealed similar results. The research group found that “participants had just as many sexual partners as nonparticipants and had sex at the same median age as nonparticipants.” In other words, abstinence education programs did nothing favorable –the result was the same as if there were no program being offered at all."

You have daughters, ask them. Bottom line is you are wasting $379K of Minnesotans money on a program that has proven to be worthless, while turning down $850,000 federal grant money for a program proven to work!  I've had enough of your far right out of touch, hurtful ideology...Ellen Goodman has it right when she wrote:

“Our investment in abstinence-only may not be a scam on the scale of Bernie Madoff. But this industry has had standards for truth as loose as some mortgage lenders. All in all, abstinence-only education has become emblematic of the rule of ideology over science.”

Go, leave, scat, while I still have one damn nerve left. You give a bad name to Minnesota!
BTW: Pawlenty, who is also writing a book while NOT DOING HIS JOB says the book 'will focus on his life reflections, his career and his "vision for America." Your vision is our nightmare.  Now shoo, off to LA-LA-Land Mr. King of Nothing....