Jesus Won't Save Me!

I got an Eagan High School emailing earlier this week from  School District 196 ( Eagan, Apple Valley, Rosemount) of a Christian event....only the email didn't identify the event as christian...see below:


The Gleason Brothers, play 70’s, 80’s, 90’s and pop/folk music
The Flip Side, Eagan HS students play their own original, alternative music
The Whiteboard Theory, EHS students play their own alternative rock music
The George Hottinger Blues Band, have played all over the Twin Cities, play outstanding popular Blues music
Admission: Adults: $10, Students $5, kids 10 and under , free
This is a fundraiser for Young Life, scholarships funds for camps and service projects

I didn't recognize the school club 'Young Life'. I assumed it was a school club because the same email also mentioned a fundraiser for the girls hockey team. I asked my daughter. She didn't know. So then I google Young Life. You have to go several pages in but I found out they were a CHRISTIAN group who's vision statement reads:


"Our Vision: Every adolescent will have the opportunity to meet Jesus Christ and follow Him."

You see the problem here don't you? I'm not CHRISTIAN. I don't want my children attending CHRISTIAN events. I don't want a school district email promoting Christian events! I'm sure many Christian parents would object to this use of school resources and if their children attended other religious event without full knowledge of them. 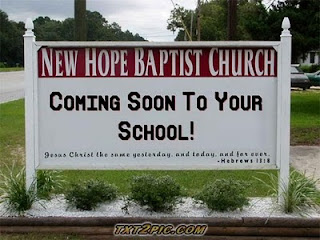 
"Thank you for bringing this to our attention. From time to time, high schools share information about community events that might be of interest to students and families. I have asked Dr. Reikowski to be aware of events like the Young Life event in the future"

WTF$@! kind of message is that? No acknowledgement of the issue and no resolution! So I email back this morning...'an email needs to go out to the same group letting them know the 'CHRISTIAN' nature of this so-called  'community event'. Although I'm being kind because it's not a 'community event'; it's a 'CHRISTIAN event'. Since the event isn't until August 10, it's shouldn't pose a problem in the school clarifying their initial omission from the initial emailing.

Well see what happens but this raises other questions. Going forward is the school district going to allow all religions to post out 'community events' like passover Seder meals, Ramadan events, or Knights of Columbus gatherings under the guises of FUN community gatherings omitting their true nature and goals? I don't think so...

Let's cut the bull and say it for what it is...they used school resources to promote a religious event and now to make it right, they need to clarify that event or retract it so parents can make an informed choice. They might even want to address that going forward they will fact check and not allow groups with this type of affiliation postings. The email is between the district and parents and when you subscribe it says:


"..numerous email lists to support improved communication between the district and residents, between schools and parents - even between individual classroom teachers and parents" 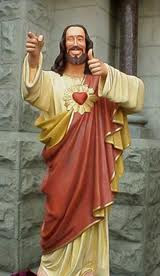 I’ve contacted the MN ACLU regarding this matter and will keep you posted. And no- in case you couldn't tell, Jesus isn't my personal savior.

NEWS! UPDATE ON THESE EVENTS!
So I posted earlier about a school/religion issue with School District 196 email list. A few hours ago I was notified they would post out information clarifying the group in question (Young Life) affiliation as a Christian Group. That was done. I told them that I sincerely hope the school district doesn't use any resources in the future to promote any religious group activity...we will see...


A special shout out to MN ACLU...who immediately turned it over to their legal staff. I truely believe had I not told the school districts I'd done so, we would still be back to me complaining and the school district not being responsive. You can join MN ACLU for as little at $35 a year ...or donate (which is tax deductable!).


Ry Cooder Jesus on the Mainline

Keep the pressure on ... too many people just ignore these complaints. When I think of the outrage expressed that a private group wanted to build a center, blocks away from NYC Twin Towers, just because it would include a "pray" area for the Islamic faithful, yet here the school system is passing along information on an event that has a strong faith overtone that will evoke no outcry ...

I hope they are renting the facility and providing security ... the taxpayers should not be footing a dime.

Man you don't know what your missing. God loves you so much! Jesus died for you....accept Him and you will be saved.

I don't need saving...I'm not interested in your insanity. You apparently need Jesus because that's your weakness...get over yourself and your g*ds.

Your anger and negative energy is sad. Even if opinions differ, your hostility is quite dramatic and attention seeking. Majority of your posts/topics are your rants and complaints. What purpose does it serve? Either way Jesus still sees you, no matter how much you deny or detest.

Ah, seems like you needed to call the infidel out (anonymously of course!), noted...don't care...be well yourself