CD2 has a bevy of top notch candidates running for office...Every one of them has worked to establish their campaigns and define their issues. It's been a team effort from the first and now the hard work is paying off. In recent years Minnesotan Democrats in CD2 have taken the very solid Red CD2 district and turned it into Blue. They hope to make it even bluer this election.
In the last six years CD2 has gone from five elected Democrats in Minnesota's House and Senate to having a whopping fifteen! They want to build that momentum even more and create a solid Democratic base coming from a district that was 'jerryrigged' by the GOP in the last redistricting to be a red foothold! But no longer.... 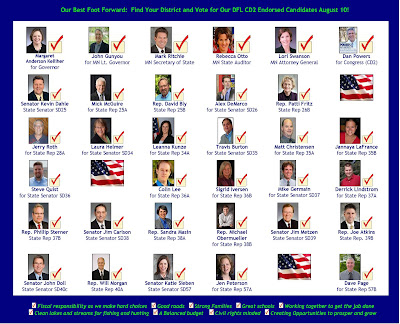 I can't help but smile to realize that the Senate District (SD38) where Governor Tim Plenty resides now has Democrats Senator Jim Carlson and Rep. Mike Obermueller representing his interests!
CD2 is also home to Minnesota's Attorney General Lori Swanson. In 150 years of Minnesota's Attorney Generals, Lori Swanson is the first women to be elected to the MN Attorney General's office. She is one of only four women Attorney Generals out of the 50 United States. Lori Swanson is dedicated to justice and quality – and has gone up against very powerful interest and won. She's smart and articulate with a strong sense of fairness.
CD2 has also seen a ground swell of support for Democrats in recent days especially for CD2 Congressional candidate Dan Powers running against Congressman John Kline and his far right ideology and partisan voting. Dan stands for living-wage jobs, clean renewable energy solutions, affordable health-care for everyone improved educational and better opportunities for our children.
Vote in the August 10 Primary Election for the DFL endorsed candidates. You can never have too many Democrats in office!
Posted by truthsurfer

Could you elaborate on the "Groundswell of support for Dan Powers" ... is there some newspaper coverage that I missed ?

But I did see that Shelley Madore was at FarmFest engaged with rural voters today ... Powers was a no show .... as was Kline ...

I have seen more coverage of Madore than Powers.

Hmm...Guess you would have to step out of Madore's shadow to see anyone else-)