Something Doesn't Add Up with GOP Candidate Doug Wardlow (HD38B)

GOP House Candidate Doug Wardlow (38B) had a reception sponsored by GOP Congressman John Kline on January 17 at Jensen's Supper Club in Eagan...Up at Wardlow's facebook are pictures of the kick off including the club's reader board (posted below). Looks like it was well attended but interesting enough...there's no mention of it on his campaign filings other than two very small individual donations of $50 each.

So where's the rest? Only two people out of the crowd gave for the total of $100? And where's the inkind for the location, food and drink? Jensen Supper Club is very nice...here's a peek at their banquet menu from their website. It's very nice but it's not FREE! Why wouldn't there be a cost or inkind from Congressman Kline (CD2) or from Kline's PAC? 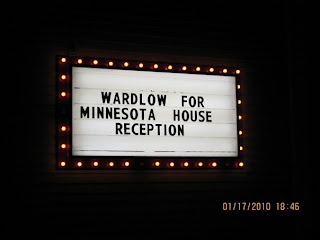 Makes one wonder if either Wardlow doesn't understand his obligations to truthfully report his campaign filings or his campaign made a mistake or the GOP base doesn't believe he can win against the very popular first term Democratic Rep. Mike Obermueller so they aren't funding him? Anyway you look at it, something doesn't add up in Doug Wardlow's campaign!
Posted by truthsurfer

Any update / reaction to your posting ? I hope that someone is asking the MN Campaign and Finance Disclosure Board to review this situation.

MN Forward plans to send out literature in support of :

Doug Wardlow (R-Eagan) - Doug Wardlow is an attorney with the Minneapolis firm Parker Rosen. He was valedictorian of his Eagan High School class and received a B.A. and J.D. from Georgetown University. His campaign has focused on improving Minnesota's job climate.

Yeah...it's pretty disappointing to see a front group for the far right extremist being able to pour money into the campaign system to support tools like Wardlow who will vote their ideology over neighborhood needs.