Minnesota has always been a 'hot dish' for politics...but that seems 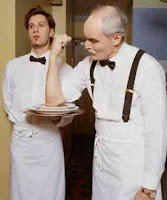 especially apt right now with the role Pawlenty has played in the McCain presidency and it's lost, Minnesota's close U.S. Senate race (including recount!), and Senator Norm Coleman's legal troubles. It is a hot, bubbly, messy dish...almost ready to be eaten or choked down (depending on your political leanings) but it's unique to Minnesotans who wouldn't have it any other way....have a great weekend.

Hearing the Loon Call…
The Governors had a hen party…er…negative nancy…er…post modeum where they assailed each other with their weakness. Our own Governor Tim Pawenty believes the GOP can rise again but only if they pick his number next go around… I could go on and on about this but really…others have blogged already on Timmy’s revelations….

Back to the elephant in the room
So what Governor Tim Pawlenty is saying …well repeating...is a story that wasn’t based on facts…imagine that…Our Governor Timmy either lied or is stupid...take your pick as both can apply.

The DFL released some information debunking a few of these wild distortions and crazy allegations coming from Coleman and his minions:

32 absentee ballots mysteriously appeared in an election official's car.
DEBUNKED: MinnPost reports: "The ballots were in cars because state law mandates precinct counting. An election judge always had custody, and they were never 'lost.' They were not in vehicles overnight and spent Election Night, and the next several nights, tucked away safely in City Hall."LINK: http://www.minnpost.com/davidbrauer/2008/11/12/4565/minneapolis_election_director_speaks_ballots_in_my_car_story_false

Al Franken's 246-vote gain in Two Harbors was suspicious.
DEBUNKED: The Duluth News Tribune reports: "An election worker in one precinct mistakenly entered 27 votes for Franken -- fewer votes even than Independence candidate Dean Barkley received -- rather than the actual 273. ... The error was caught and reported to the Minnesota Secretary of State's office the next morning after election officials reviewed the results."LINK: http://www.duluthnewstribune.com/event/article/id/78205/

"Mr. Franken's gains so far are 2.5 times the corrections made for Barack Obama in the state."
DEBUNKED: A Star Tribune news editor writes: "His numbers are simply wrong. I don't know what statistical calculation Lott was using, but Obama clearly got more from the corrections." According to the editor's calculations, 58 precincts changed their Obama totals for a net gain of 1,121 votes, while 48 precincts changed their Franken totals for a net gain of 459 votes.LINK: http://www.startribune.com/opinion/34357569.html

From the Wall Street Journal: "This lopsided bleeding of Republican votes is passing strange considering that the official recount hasn't even begun." (Coleman's campaign has called the shifts "improbable and statistically dubious.")
DEBUNKED: According to the Associated Press and Minnesota Public Radio, since 1998, we have had 18 statewide elections followed by canvasses. And this year's shifts are smaller than any of them.LINK: http://www.alfranken.com/page/m/734f0598f82922dc/iYN7j7/VEsC/
Posted by truthsurfer