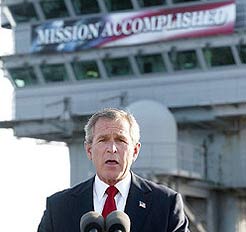 Have you seen the new ‘Let’s sell the war in Iraq’ TV commercial called MidWest Heroes being aired in Minnesota by special interest group PFA (Progress For America)?

The Pro-Iraq war ad endorses the war by skillfully blending a few facts with a lot of fiction and emotional touches by having U.S. veterans mislead us into believing the war is (will be) successful. Unfortunately, it's not. Reality Check on WCCO has a brief video the labels the TV ad as misleading at best.

PFA is a national tax-exempt organizations closely tied to Bush Administration and Washington DC GOP political insiders. They were established in 2001 to support Bush's 'agenda for America'. So in essences we have Bu$h supporters supporting Bu$h's failed Iraqi War effort and using donated money to try and 'sell' the war to the rest of us.

Interestingly Minnesota is only state where the ad is currently running. They assume a one minute campaign of mis-statements and lies verses responsible content will sway Minnesotans into supporting the failing war effort. They underestimate Minnesotan's intelligences and values.

The Minneapolis Star's Nick Coleman's had a February 11 story that said:

But for those devoted to political spin more than truth, there was a positive development in the war, a development which, oddly, took place on TV sets in Minnesota.

A commercial featuring veterans of the war in Iraq began airing here, telling viewers that the war in Iraq is against the terrorists of 9/11 and that it is going swimmingly.

These are dubious assertions, given that the war was billed as a war against Saddam Hussein and that it had cost the lives of 2,267 Americans as of Friday (almost 1,800 since the president said the mission was accomplished).

Evidence of a menacing increase in insurgent attacks on American troops in Iraq was declassified and presented to the Senate Foreign Relations Committee in Washington, D.C., last week. The news was grim: There were 2,500 insurgent attacks in December, and although there are peaks and valleys in the numbers, each peak is said to be higher than the peak before