Show Me The Money Mr. Bu$h!

Wondering why you can't make ends meet even though Bu$hCo says the economy is going gangbusters? Take a look at this chart from the federal reserve: 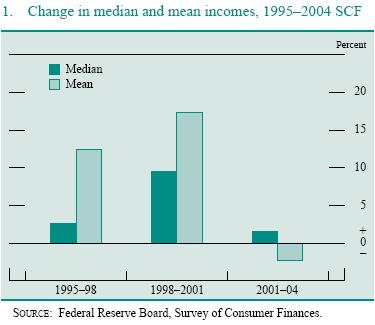 The Federal Reserve Board reported today that the average income of American families, after adjusting for inflation, declined 2.3% in 2004 compared with 2001. (yes we're going backwards over the years!)

The White House reported in August 2004, "Real after-tax incomes are up 11 percent since December 2000."

Once again Bu$h's economic statistics have no basis in reality. Unfortunately, the American public can't feed their family, get to work and provide necessities on what Bu$h says vs. Reality!
Posted by truthsurfer