No Valentine For Kline 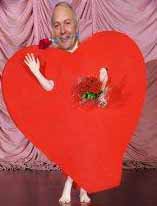 Congressman John Kline( MN- CD2-R) won't be receiving a valentine from the NAACP any time soon. A recently released scorecard by the NAACP on the 109th Congress gave John Kline the lowest rating from among the elected officials in Minnesota: A failing 22% on African-American issues.

The mid-term report card graded members of Congress on several pieces of legislation that deal with issues important to the African-American community including judicial nominations, discrimination legislation and education and environmental issues.

John Kline earned his failing grade by among other things: Voting against preventing discrimination when allotting federal funds (HR3862) while allowing federal surveillance of library records (HR 2862) and supporting CAFTA.

What an embarrassment to the voters in CD2. Time to replace Kline with someone who will represent everyone fairly.

The full NAACP scorecard is here.
Posted by truthsurfer

Nice...do ya think he shaves his legs?

Do you think he'll come out with a statement about the dancing heart being an insult to his image, his honor, his integrity... blah, blah, blah... and demand an apology???

I wonder what U. Grant would say if he know that Kline was trying to replace his photo on a $50 bill??? Is that a way you treat a war hero? What an insult to veterans - all veterans, having Grants picture replaced by one of our worst Presidents.

I kinda of think Kline looks nice in red!