It's a wonder that we aren't all dead yet given that 43% of the US budget is spent now on death ...i.e our grossly bloated military spending). The U.S. is also getting closer to out spending the world collectively (yes the whole world) in military spending! This is just damn frightening. The kind of stuff that keeps me awake at night wondering if the sun will rise tomorrow.
We can't afford the cost of schools, books, food, housing, transportation...but we can buy more guns and war toys? Add into the mix that currently, the U.S.'s military budget is woefully inadequate to provide proper medical care for returning veterans of its two “wars of choice! 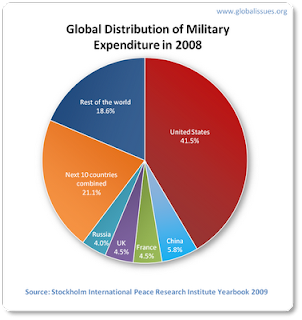 Has the lack of money for community development in favor of defence presented America with a Trojan horse?  We have a model in the Soviet Union that continued to dump money into their military budget, while their economy became stagnate and died.
Maybe there's a silver lining or rosy glow to this....  Recently there has been bi-partisan support that failure to curb defense spending, would “do substantial damage to our economy and dramatically reduce our quality of life.”  In other words, the longer the US maintains and feeds this bloated war machine, the close we come to become a 3rd world nation.
Posted by truthsurfer

I am very glad that somebody is writing about this.

Consider these points :
The Pentagon’s base budget request for fiscal 2011 represents an increase of about 1.8 percent over fiscal 2010, when defense spending rose 2.1 percent. Those budgets follow eight years of 4 percent average annual growth.

Congress approved $104.8 billion for weapons buying this year and is considering proposed procurement spending of $111.2 billion for fiscal 2011, which begins Oct. 1. The Pentagon may request $120 billion in 2012, rising to $137 billion in 2015, according to Pentagon Comptroller Robert Hale. AND don't forget that Congress writes its own EARMARKS to pay for F-22, F-18, etc. that the Pentagon does not want.

According to the 2010 edition of the IISS Military Balance, in 2008 the US spent about 4.9 percent of GDP on national security, and the defense budget has grown in real terms by about 3 percent per year since 2001. By contrast, China spent about 1.4 percent of its GDP on defense, Russia 2.4% Great Britain only 2.3 percent , and German and Japan roughly 1.3 percent and 0.9 percent respectively. Lucky them.

Here's my question, when will a candidate for Minnesota's Second District challenge John Kline for his support of earmarks ... no not earmarks for projects in the District, but for military earmarks that the Pentagon does not want, but Republicans believe are necessary ... ( or as he explained to justify his vote for additional F-22 jets that this was a "good jobs" bill.)

YES, Kill Me too.