Emmer Fudge Time
Sure Tom Emmer, Republican gubernatorial candidate in Minnesota, has given us the myth of the $100K a year waitress but I’m going to give everyone a free tip that probably isn’t a myth…don’t accept an invitation to dine publicly by Tom Emmer. I’m thinking many of the waitresses probably resent him trying to steal from their puny salaries. I’m not saying waitresses will retaliate but why take a chance, lots of videos of food being mess with  on the Internet (warning may make you sick!)..just don't bite-)…on second thought the best way to get even is just not vote for the jerk! 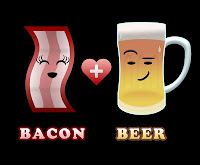 Show Me The Bacon
Remember when happy hour had some pretzels and half priced beer! Well show me the bacon! Bacon is the latest fad including here in Minnesota . Ah “a basket heaped with a fistful of the stuff [bacon].” And beer! Must be getting close to lunchtime because I can smell the bacon. This reminded me of that dog commercial where the dog repeatedly screams BACON! Bacon! Bacon! Show me the Bacon!...or is that me? Did I just scream Bacon, Bacon, Bacon, out loud? LOL