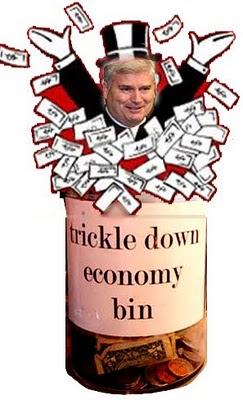 “There's a one-sided war going on between financial elites and the rest of us. They've engineered the economy to enrich themselves at our expense, with Wall Street taking the lead. The numbers don't lie: In 1970 the top 100 CEOs earned approximately $45 for every dollar earned by the average worker. By last year, it was $1,081 to one. There is no economic theory that can explain this obscene gap.”

So yes we need more jobs, but those jobs need to be a living wage with benefits like medical or we're just 'making hay for the lords rich' while more and more serfs servers (est. 50,000 in Minnesota)  fall into poverty.  How about if Emmer advocates for jobs that provide us with the ability to sustain ourselves and families instead of more below average paying jobs to serve the wealthy.
What's so intriguing about this is that a suppose GOP conservative (as Emmer defines himself) is asking for wealth to be redistributed (can you say socialism!). Only the idea isn't to make wealth more equable to all Minnesotans...nope... What’s next form Emmer? Can we expect a request for a return to slavery?

Ouch ... you're stepping on some toes here -- "How about if Emmer advocates for jobs that provide us with the ability to sustain ourselves and families instead of more below average paying jobs to serve the wealthy."
And then to compound it with Wall Street salaries --- ooh ... double ouch.

OK, you've said that a CEO makes $1,081 for every dollar that the average worker earns ... but how about those workers that make less than the average worker ? According to the MN Dept. of Employment and Economic Development the average hourly wage in 2009 for a fast food cook was $8.54 per hour while a child care worker is $10.03 ... and those tellers in those banks that are on CEO's front lines make $11.86.
Talk about serving the wealthy !

(Oh, did you know that CEOs typically get stock options which they purchase at discounted rates and then sell at the current market ... for which they have to pay Capital Gains tax ... but remember that Capital Gains tax is lower than taxes on employment wages.
The message that everyone should ask is not how can we lower taxes, but how can we make taxes fairer.