Lipstick Lies and the Republican Platform.

"We do not support government bailouts of private institutions. Government interference in the markets exacerbates problems in the marketplace and causes the free market to take longer to correct itself. We believe in the free market as the best tool to sustained prosperity and opportunity for all." 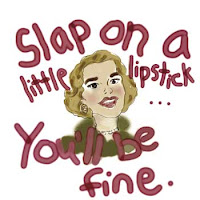 I really don't believe for one second the rumours about McCain pushing fellow rethugs to smash the current deal and walk out so that McCain has a weak tea excuse to pass on the debates! Surprise! No not really. The walk out (political theater) was brought to us by the same group that went to war without a sound reason or being prepared. They pursue their ideological agenda regardless of who gets hurt in the process...even at risk to all Americans. Whew, now that I got that off my mind...I really must change this shade of lipstick!

Sarah Palin, trying to explain to Katie Couric why giving Wall Street investment companies a 700 billion dollar government handout is a better idea than giving that money to middle class Americans...which I hear that each American (man, women and child) would get about $2,500 if the $700,000 was divided up among us!)

Love this take from F. G. Fitzer : "I was going to try to explain how the bailout plan is completely unrelated to health care reform, and isn’t a spending cut, and all that, but then I noticed that Sarah Palin has cute little glasses and a signature hair style, and the hypno-rays emitted by Palin’s breath of “fresh air” put me in a numb trance once more"

Minnesota's Second District Congressman John Kline has take $780,000 from Wall Street. Wonder where he stands on this crisis...(probably up to his lipstick in it!)