Minnesotans are getting 'pawlenty of partisan politics' these days. Personally I'd much rather see my governor be a state leader instead of a simplist slogan pen collector! The issues facing our state are servere and can't (nor should they) be brought down to a moronic slogan level. For those of you not paying attention the Republicans spent nearly five hours speaking against the tax bill, but then they offered no amendments to change it! If that isn't partisan politics WHAT IS? 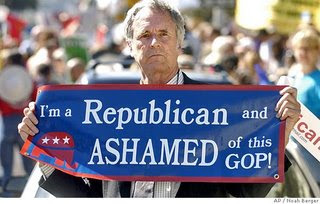 Governor Pawlenty needs to take his job responsibilities to Minnesota more seriously. Gone is the rubber stamp and voter mandate for his 'do nothing for Minnesota but save the wealthy' policies! Do the wealthy really need you to save them? And next time you hear that you pay too much in taxes, ask them if they've ever been to Mexico where you pay hardly any taxes. Do you really want Minnesota to become like that? Call your representatives and tell them what you want. Let them know that becoming more like Mexico isn't what you see for Minnesota's future. The MN Budget Project had an interesting look at our taxes:

Tax rankings are popular because they compress complex issues into a single number. But Minnesotans need to be particularly cautious of claims about the size of government that focus on only one piece of the puzzle, especially when those claims are used to justify the sort of tough belt-tightening measures that Minnesota has gone through for the last two years. State comparisons should include all government revenues — not just state taxes — and should also take into account variations in incomes among states. Based on this more meaningful and complete measure, Minnesota ranks in the middle of the fifty states.