Currently serving in Iraq is a National Guard Brigade of Minnesotans which by the time of their deployment back to the states (Aug. 1, 2007) will have become the longest-serving National Guard unit (22 months) in the Iraq war.

Long tours are related to rising stress levels and eroding morale and mental health of those serving in Iraq. It is an excruciatingly long time to be away from one’s spouse and children and also interfers with the need for both rest and training among the troops. Studies also show that misconduct occurs more frequently as stress levels increase.

But the problems don't end there...Bu$h is using our military to the point of exhaustion while compromising homeland security and safety back home in America. 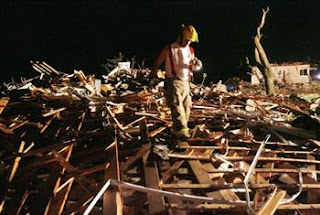 The State of Kansas is recovering from a series of disasters from tornadoes to flooding. There have been a dozen deaths and many are now homeless and without resources. In the past, the national guard’s personnel and equipment would be called up to assist with the emergency. But here’s the problem…Iraq.

The war in Iraq has had a serious impact on the National Guard and its ability to protect and assist Americans in times of disaster here at home. While Kansas citizens currently have an immediate need for the national guard, they have access to only about 40 percent of what would have been available before the guard went to Iraq… Forty percent of what they need!

Kansas' governor says tornado cleanup efforts are being hamstrung because the state National Guard is on a mission in Iraq. And before this, there was the significantly unavailability of the National Guard to respond to Hurricane Katrina victims.

The non-partisan Government Accountability Office has repeatedly cited the deployment of the guard troops and its equipment as a problem for domestic preparedness and disaster response (including domestic terrorist events!)…

The Special Commission on the National Guard and Reserves and Retired Generals have warned this administration that the Iraq war strategy is pushing the already overstretched Guard to the breaking point. "Kansas is not an isolated situation. Every state is significantly below level for equipment across the National Guard," Brig. Gen. Stephen Koper said

The President’s illegal war has over committed our military resources, depleted our strategic reserves and left the heart of America wide open. Minnesota, with what appears to be the longest servicing National Guard unit in Iraq has just been lucky…so far. Let's bring them back home this time (no extensions) and hope there are no major disasters in Minnesota before then.
Posted by mnsky