The party of small government and no taxes in Minnesota are preparing to grow the role of government and do so at taxpayer expense...yes once again, those GOP candidates that got elected by 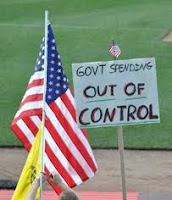 promising to stop out-of-control government spending is working behind the scenes do do just that...

MN Voters Alliance has put out an email saying they are working closely with board member and former Secretary of State Mary Kiffmeyer to introduce a bill mandating a statewide photo ID as a first priority.

"...If Governor Pawlenty is still in office in January, he would undoubtedly sign it. If Dayton wins and is seated sooner rather than later, we are already preparing a campaign to urge him to sign the bill, including our PHOTO ID petition in St. Paul which we have nearly 3,000 signatures."

The question to ask is: Will our newly elected GOP allow an outer space, right wing, moon bat group that alleges widespread voter fraud but can't prove it because they pull them out of their paranoid tin foil hats, increase both taypayers costs and time while growing government bureaucracy? Well will they?

Never mind the facts...that voter fraud in Minnesota is virtually non-existent. That in 2008 only

26 people out of the entire state were convicted of voter fraud. And most of those cases would not have been prevented with a state ID...hardly worth the government involvement or cost to taxpayers...from the Minnesota County Attorneys Association...

"The report found that only 26 people had been convicted of voter fraud in the 2008 election (because the statute of limitations on voter fraud is two years, that number is not likely to change). That comes to 0.00089 percent of votes cast in 2008."
So by all means, throw taxpayer money away because a group of morons make statements that aren't based in fact...and let's grow government even larger to placate these idiots...because there will be another election in two years and there will be accountability......go ahead, you either support small government and less taxes, or you don't...time to put up or shut up. Taxing. spending and growing government over a non-issue will define you next election.

This is a “solution” for a problem that has not been proven to exist.

During the Senate recount, it was proven that a number of people falsified absentee ballot forms … many times it was a “helpful” parent. This won’t change that.

Also, GOPers don’t want to acknowledge Coleman’s attorney Joe Friedberg’s comment during the MN-Supreme Court oral arguments “that there is no evidence of fraud or misconduct”. Yet, all we hear about is ACORN and Ritchie stole the election. (Side comment : Even Coleman now admits that he lost the election when he voted for TARP … which is why 63,203 McCain supporters did not vote for him.)

Why do Republicans want to burden county election officials with producing more State ID cards and cause more delays in the voting process ?

With early in-person voting, these problems would be minimized. That's what really needs to be pushed. In this past election, the percentage of registered voters that voted dropped 3% ... in a Special Election, there might be less than 35% of the registered voters that will participate. We need No Excuse Early voting ... which can be done at official places (county courthouses, city halls, etc.) during the week prior to Election Day.

Second, I have voted at the same place for over 20 years ... the guy that checks my name also passes the basket at Church ... we see each other at the store ... do I need to have my ID check ... well, if my precinct is targeted it will be.

Third, what about college students ... they probably don't update their driver's license to reflect a campus address ... and if you moved during the term, you could have changed precincts ... you're rejected. What about students whose parents live in another state and the student doesn’t own a car … they have no reason to get a Minnesota driver’s license yet may feel that Minnesota is their home and want to vote in the Minnesota elections … nope, you’re rejected.

Fourth, what about seniors ... who may no longer have an active driver's license ... why renew when you don't drive ... you're rejected.

Sixth, what if my driver's license has lapsed ... how many of us forget to get it renewed on time (good thing there is a grace period) … your license is not valid … no vote.

Seventh, what about medical situations … for example, poor vision (visual acuity of 20/100 or more will deny you a driver’s license) … plus the number of people that have physical reasons why they don’t drive … but no driver’s license means no vote.

Oh sure, Minnesota has State Identification cards but you cannot get one if you have a driver’s license. And if you don’t have reasons to have a State ID card, why would you apply for one. Plus there is a fee (that the legislation may require it be provided free if it is to be used for voting … great investment of state funds … we must be in surplus mode).

OK, I am going to try to control my anger at this issue ... but it's tough.
First, I thought many in the TaxEnoughAlready crowd were Libertarians who generally don't like the idea of Government, ID.
Do you think they would a Government Identification card that could be used for voting but also includes whether you can own a gun, driving record including number of arrests, sexual predator status? Heck, if there is going to be a Government, ID, let's at least make it complete.

I look down the road ... pass Voter ID and the first thing that will happen is to target precincts that will likely support your opponent ... then challenge the accuracy of the ID ... whether or not it is a valid challenge (remember the challenged ballots during the Senate Recount ... where every squiggle resulted in a challenge --- can you hear it now … jeez, looks like you’ve put on some pounds … is that you without the beard … take off your cap so I can see your full face – so what if the voters get angry, they weren’t going to vote for your candidate anyhow ) ... the objective is to slow the process of voting ... now, remember we vote in November ... snow, cold, rain .... people standing in lines ... parking becomes a problem ... people give up even though they have valid IDs … they got kids to pickup … dinner to make … or if you are in Bachmann’s district – a third job to go to.