Say What? The Minnesota Pioneer Press endorsed Doug Wardlow for having a 'slight advantage' over the outstanding DFL candidate Rep. Mike Obermueller (MN-38B)? Say it isn't true!
...Folks this was a no brainer... 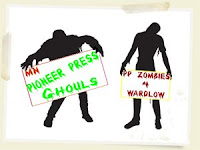 Mike Obermueller has both the experiences and personality that makes him not a good Minnesota Representative, but a GREAT Representative for the local district. The reason the PP stated giving the endorsement to the far right Wardlow was....wait for it...."international trade issues in Washington"....Hmm, so if you want to be a MINNESOTA Rep, all you need is 'international trade' experience?

That's quite the reach compared with Mike's stellar record actually doing the job the last two years, his ability to compromise and reach across both party and ideology lines, his work integrity, and he's lived in the district instead of recently 'coming home' like Wardlow Jr....yep...'international trade' experience slight edge my ghoul ass!

This is why the paper's readership has steadily declined: They lack the ability to 'grow a pair' when it comes to bucking any far right ideology. Even the weakly thin reason cited fails to resonate within the local district. Local voters don't give a rats tail about international trade, they care about the ability to do the job as necessary, something Mike Obermueller has shown time and again along with being consistent, fair, practical, open and ethical.

The MN Pioneer Press endorsement of the far right ideologist in Wardlow Jr. that blogs that same ideology while working in a non-partisan position as a law clerk (doesn't say much for Doug Wardlow morals or his ability to be non-partisan even during working hours!) is both a shame and a sham. 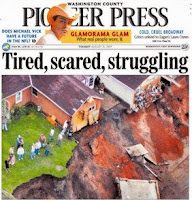 Doug Wardlow is a tea bagger who will cut all services for cutting taxes for the wealthy and deregulated government to the point of drowning it in a bathtub with no drivable streets or funded schools...sound familiar, it should, we lived under that ideology with Tim Pawlenty for the last four years...(bwt this is in fact Pawlenty's Senate District!).

Readership is down at the Pioneer Press, and given this failed endorsement...so is their credibility...They are one of the top ten newspapers expected to fail as they are heavily leveraged, with loans from Hearst, Gannett and even Bill Gates, and short on cash. And while they filed for bankruptcy protection in 2009, they are just sinking deeper in debt. Part of their struggle is based on making a whole series of mismanaged wrong choices including endorsement of Doug Wardlow this weekend..er...unless there really are brain eating zombies loose in their office...just saying...