Government By The People?

The Chamber of Commerce Horrors
First, the Chamber of Commerce lies about membership numbers, then they hurt local jobs by advocating outsourcing, and finally they support political agendas and campaigns with anonymous donations including foreign dollars mostly for the GOP (or party of no business regulations) and attack Democrats...


"The U.S. Chamber of Commerce, which does not have to disclose its corporate donors, plans to spend $75 million on political advertising in this election, nearly all of it on behalf of Republican candidates. That's twice what it spent two years ago." 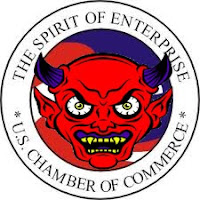 In Minnesota, the CoC is using/funding the front group, Coalition of Minnesota Businesses (CMB) PAC, for the worse kind of personal attacks against local Democrats like Rep. David Bly in SD25B, with their negative and misleading ads. Less than a third of organizations spending money on the fall elections thus far are disclosing their sources of funds, thereby denying citizens any knowledge of who is trying to influence the election, let alone toward what end.

These front organization often have the words Minnesota, American, Freedom, Small Business, Truth, and Free Enterprise in their organizations name, but don't be fooled, they are supported by and for big business and don't have the communities best interest as their goals. Their influx of big dollars can buy a candidate that will defend their special interests over our families and communities well being.

If things continue like this, next thing you know they will be filing for tax exempt status as a church (see below)...

The devil works in strange ways. 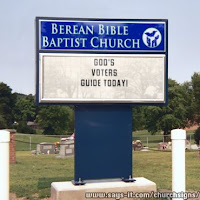 To repair our badly broken campaign finance system and restore a government that is – in the words of Abraham Lincoln – of, by, and for the people, Congress should take campaigns out of the hands of special interests by passing Fair Elections. This includes all business, corporations, religions and special interests.

Don't be surprised if you read about some church goer being disruptive during services this weekend...it's just me busy doing the good work. Have a nice weekend...cya 'out and about'...

FYI : Watch out for mailings attacking David Bly from the Take Back Minnesota effort being funded by the Freedom Club State PAC. On the MN Political Roundtable is a discussion of their recent television commercial targeting a St. Peter DFL incumbent. $30,000 buys a lot of TV ads in the Mankato market, so they may have to resort to mailings … which they have done in the past … and had campaign compliants filed against them … but if the mailings get into the voter’s mailbox, it does not matter if anyone complains … it will too late.