One Out of Three!

Minnesota's Economy
The Gubernatorial candidates have squared off several times and the state budget always seems to be the number one issue. Each candidate has their own take but here's what I think is significant: Mark Dayton is willing to work with the Legislature to find new revenue and develop a state budget as mandated by the State constitution. The other two candidates (Tom Emmer-R and Tom Horner-I) don't see working with elected officials as being part of the budget plan. In toady's fluid economic times, that one trait, 'being willing to work with MN legislaturers', is probably the most important.
Whatever all three candidates balance today, could be off by tomorrow because of inflation, recession, disasters, and the stock market. But the willingness to adjust by working as a team member with the legislation is pivotal. Our example has been Pawlenty's use of vetoes and unallotment to budget because of his inability to sit down at the table with the legislaturers.
When you think State Budget, think who will be willing to work with others. Tom Emmer's style of leadership is similar if not more radical than Pawlenty. Emmer’s uncompromising style has even alienated House GOP colleagues!
Small Business Sense
The below chart  from Paul Krugman, shows 24 years of data from small business owners on the biggest problem(s) they have to face. The last two years the percentage saying "poor sales" is significantly higher than any other issue/time. Look for the trending to go even historically higher given the poverty rate is 14.3% (highest since 1994). When you don't have money, you can't afford to buy!

"...: if you ask businesses - as opposed to their lobbyists - what their problem is, you find no hint of the stories the usual suspects are telling you about government interference, political uncertainty, etc.. Businesses aren't hiring because of poor sales, period, end of story.... " 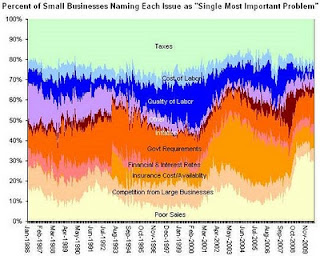 The simple truth is: Make the rich pay their fair share and put incentives in place to allow the middle class to spend more. Obama's plan is a win/win. BTW, in case you're wondering if you are poor, here's the official guidelines.
Posted by truthsurfer

Did you hear or see the debate that Rick Kupchella moderated ?

Dayton has a problem ... and Horner nailed him on it. Horner asked him to name ten legislators that would support his tax plan as he submitted it ... Horner then spotted him John Marty ... Dayton had no answer.
That's the problem in a nutshell ... you are correct that the legislature will be the main stumbling block. Emmer's plan will never pass, so it will have to be done through shutdown (which I suspect Emmer would accept) and veto.
Dayton has the same problem ... no Republicans will support him ... in the previous session, the House voted on a bill that would raise taxes on the "rich" and that did not get all DFL votes ... even though they knew that they could vote for it knowing that Pawlenty would have vetoed it anyway.

IMO, Horner may have the best chance of working the MN-GOP versus the DFL legislators and getting an agreement ... but Horner has another problem ... getting from 16-18% of the vote to 34% to win.