Check your mailboxes! The Catholic Bishops are sending you a GOSPEL OF HATE..... The Minnesota Catholic Bishops have launched an aggressive and expensive six week campaign telling Catholics to hate gays, urging them to contact their legislators calling for a constitutional amendment banning same-sex marriage, and vote in the November 2 elections for legislators that will support their homophobic hate agenda.
Minnesota Archbishop John Nienstedt, who leads the Archdiocese of St. Paul and Minneapolis, is calling for this a religious right constitutional amendment banning same sex marriage. Part of his reasoning (if you call hate reasoning) says a lot about the state of marriage in our culture and has nothing to do with gays: 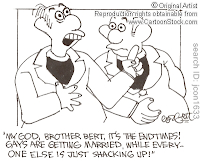 "...we all know the state of marriage in our society today -- the fact that ... four to five out of every ten marriages ends in divorce, the rate of cohabitation has gone from half a million in 1965 to over 5 million couples today. One out of every three Americans over the age of fifteen has never been married. And there are 19 million children being raised by single parents."

I'm a widow but was married for 36 years to the same guy. Never once was our marriage threaten, harmed, or endangered by gays, gays unions, or same-sex marriages. We even lived in San Francisco for awhile! This isn't about helping marriages but retaining power, old out-dated dogma, and dictate their religious insanity that institutionalizes their prejudices into our government!

Archbishop Nienstedt's hate crusade against homosexuality is religious fanaticism...wouldn't it be nice if he spend as much or more time crusading for women's rights, children's welfare, the poor, hungry and homeless?  In Nienstedt's own words, the rape of children is 'a sin that cries out for forgiveness' rather than a crime that cries out of justice. Nienstedt excused pedophilia in his church by linking it to the sexual revolution of the 60's and 70's which is both inaccurate and irrelevant. His lackadaisical efforts in exposing and covering up this abuse goes a long way in explaining his lack of immoral leadership in calling for anti-gay hate legislation in Minnesota.


The Archbishop is blandly misusing his church position to elect the GOP candidate Emmer who is also homophobic and doesn't support same sex marriage while Democratic-Farmer-Labor Party candidate Mark Dayton and Independence Party candidate Tom Horner support the rights of the GLBT community. This is outrageous from a religious leader and institution exempt from taxes. Where's the separation of Church and State?

It should go without saying that each of us should be allowed to marry whomever we choose. Until the right-wing, religious fanatics like Archbishop Nienstedt stop trying to control everybody else and force his “morals” down the throat of our government, there can be no real freedom. Civil rights can't be "voted away," that is the purpose of the Bill of Rights. He can legislate the Vatican, but he should have no power over our government!
Additionally, at a time when poverty in America is affect one out of seven, the Knights of Columbus are spending MILLIONS fighting same sex marriages. This includes funneling monies through NOM to keep donor names undisclosed. According to Phil Attey, executive director of Catholics for Equality:

“You’ve got this really interesting funnel of tax-free money coming from the Dioceses and the Council of Bishops and the Knights of Columbus directly to these campaigns.  Why are groups like NOM hiding where they’re getting their money? If it turns out to be a front group for the conservative side of the church, Catholics have the right to know because the majority of American Catholics, and we can show you heaps of polls, don’t support that [kind of spending].”

If you receive the 'piece of crap' DVD touting anti-gay hate legislation, mark it 'returned to sender'. Although the cost of sending it back will be nothing compared to what Nienstedt and the Catholic Bishops want the GLBT community to pay by taking away their human rights.

I loved this. I feel very strongly about marriage equality, despite the fact that I know no gay people. I'm married with two children. Yet, to me, to tell someone Wii they can and cannot be with is inhumane and callous. And none of their business. If it's against their religion, don't perform the marriage ceremony. But in our great, free country, their religion shouldn't have to be mine. And, being a free country, I don't believe our laws should reflect religious doctrine.