Surprise! Bush is still a Moron.
Sure it's going badly but it can get worse: A new poll finding that 70 percent of Americans disapprove of the president's handling of Iraq. 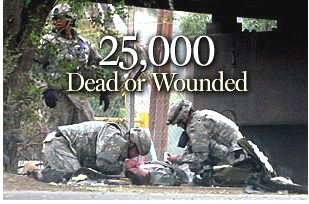 Still Bush says: HE 'WILL NOT BE RUSHED' INTO DECIDING ON A STRATEGY CHANGE ON IRAQ, AND SAYS HE'S HEARD SOME 'IDEAS THAT WOULD LEAD TO DEFEAT.

Duh, I'm rendered speechless just like those now dead and wounded by his arrogance!


Food for Thought? Bite Me!
Elizabeth Schulte's article Hungry for the Holidays at Counter Punch cites:

It goes on to mention the wordsmithing being played by the USDA replacing the word 'hunger' with 'very low food security'.
Posted by truthsurfer