Okay, it's a little over a month after the midterm elections and while some of the ramifications of the Democratic landslide are still open to debate, two facts are crystal clear: Keith Ellison is the first Muslim to be elected to Congress, and that fact is driving the right-wingnuts batshit insane.

Two examples of right-wing pundits racing at top speed to see who can be the stupidest have been pretty well publicized:

Dennis Prager, in an opinion column about Ellison's desire to be sworn in not with a bible, but the Koran: "...Forgive me, but America should not give a hoot what Keith Ellison’s favorite book is. Insofar as a member of Congress taking an oath to serve America and uphold its values is concerned, America is interested in only one book, the Bible. If you are incapable of taking an oath on that book, don’t serve in Congress...

"CNN Headline News host Glenn Beck, ...""Sir, prove to me that you are not working with our enemies."

The only thing Keith Ellison is guilty of is subscribing to a faith that hate mongers have decided to use in an effort to keep the gullible and the bigoted afraid.

Maybe some of it can be understood, since from day one, the majority of the media coverage has focused on Keith's religion to the exclusion of all else. Maybe it is understandable that some people in this country are asking how Minnesota could do such a thing as send a member of the "enemy" to represent them in Congress.

In all the hoopla about Keith Ellison's spiritual beliefs, no one seemed to get around to actually examining Keith's legislative record. After all, unlike his two opponents, he did have one, and it was exemplary.I covered the Minnesota state legislature for three years as a journalist, and I saw Keith in action day in and day out. I know Keith's record because I saw him establish it. I think it's safe to say that while Minnesota picked another elected official that defied "conventional wisdom," Keith Ellison is not another Jesse Ventura.

To those frothing at the mouth about how Keith is going to represent America in the United States Congress, I will just say this: Calm down. Keith did an outstanding job representing his constituents in the Minnesota legislature, and he will do a fine job representing them in Congress. 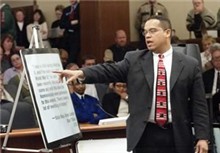 For those manufacturing a fake issue out of Keith's desire to be sworn in using the Koran, I want to point you to an article I wrote back in 2003 about the debate over a bill introduced in the Minnesota House.

I called the article "Food Fight" and it covered the efforts of the then GOP House majority to reduce the number of meals provided to inmates. The GOP had a sizable majority at the time, and the loony mean spiritedness was thick in the air.

Here is the relevant paragraph:"In a 90-minute debate, which was heated at times, DFL Representatives strongly spoke against the proposal. In an impassioned appeal to fellow Legislators, Minneapolis Representative Keith Ellison confronted the characterization of prisoners as rapists, murderers, and child molesters. Pointing out that more inmates are actually non-violent drug defenders, and that the majority of them are of color, Ellison invoked scripture: " However you treated the least of you, my brother, that's how you treated me."

Note that Keith didn't quote the Koran. He didn't quote Mohammed. He mentioned the Bible, and he spoke of compassion, which is a common theme of his. Keith spoke with passion and he spoke with obvious heartfelt concern about those who had fallen to the bottom rungs of society.

This is not the only example I could have used to illustrate these qualities, but it is the one that was easiest for me to find--none of the articles I wrote exists online any more.This is the kind of performance that sent Keith Ellison to DC and returned the GOP to a minority in the Minnesota legislature.

Swear to uphold the Constitution is what Keith will do next month, and uphold the Constitution is what he will do after that. I know, because that's what he's done his entire adult life. And he will represent his constituents using the same values his detractors have shown they don't share. The ones they only give lip service to, while they hide behind overwrought shows of faith and use their Bibles to sow hatred and fear.

-Isaac Peterson is a friend, twincities writer and occassional guest blogger on Truth Surfer and Down with Tyranny
Posted by truthsurfer