Ho Ho HO
Santa came early for the voters in SD38 this year by electing new Rep. Sandra Masin and Senator Jim Carlson. Couple that with the narrow defeat (160 votes!) of Democratic candidate Mike Obermueller, and it’s easy to see the times are a changing in Pawlenty’s backyard. 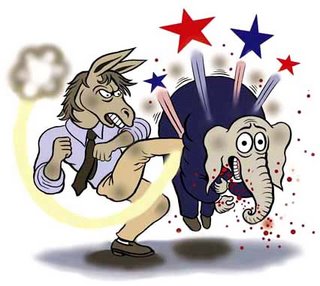 MnpACT blogger Chris Truscott had some interesting insight into the lone Eagan GOP Rep. Lynn Wardlow, and his pending demise:

"As Eagan grows, new residents are starting to cancel out those who know Wardlow as "my kid's old teacher/coach." These new District 38B voters expect answers on real issues and aren't interested in perpetuating Wardlow's taxpayer-funded retirement job in the Legislature."

And naturally the very cheap (but true!) dig at Wardlow’s inability to do anything except as directed by the GOP rank and file…

"He [Chris] thinks if new District 38A State Rep. Sandy Masin is smart, she'll stand where Wilkin used to sit and flash Wardlow a thumbs up or thumbs down before each vote. If Wardlow's smart he'll listen to Masin."

I also would give credit to the great Democratic activists and candidates in SD38. They worked night and day to turn years of RED into a Democratic BLUE. While Wardlow traded on his name recognition, Mike Obermueller was establishing his own name and stances on issues.

Mike is an all round great guy that's smart and caring, with a strong family and community base. Mike hasn't said if he'll run next election, but if the voters in SD38 are lucky, they'll see Obermueller make a second try against Wardlow. Of course, finding anyone better that 'lock and step' Wardlow is easy.... Still it would be great to have such a outstanding Democratic candidate like Mike Obermueller. Eagan Democrats gave the local GOP a lickin' and they're not done yet.
Posted by truthsurfer