Yeah and if you believe that then you'll believe in Minnesota's Rep. John Kline's Magic recruitment wand...

It appears that the federal government is going to "test" the selective service system:

"The agency is not gearing up for a draft, an agency official said Thursday. The test itself would not likely occur until 2009." 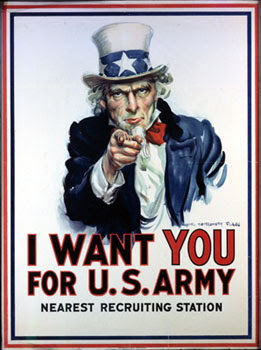 Meanwhile, the Secretary for Veterans Affairs Jim Nicholson said that ''society would benefit'' if the U.S. were to bring back the draft. He later issued a statement saying he does not support reinstituting a draft. Which sounds a lot like John Kline's saying he doesn't support reinstituting the draft but wants to increase active military personnel.

PS. Who is Uncle Sam and why does he want you?
Posted by truthsurfer