It's Time to Stop Spitting In The Wind

There are 12 or so million undocumented –or illegal aliens- living within the United States borders. That number doubled since a decade ago. Once found primarily in the fields of the Southwest, they now occupy the front lines of the service industry in almost every state. Minnesota is no exception to this.
They are all lawbreakers, here only because they violated our borders and broke the laws governing legal immigration. A majority of Americans feel that these immigrants have no rights here and should be sent back to where they came from….

I have a friend, David. I’ve known him for over thirty years, and he’s an undocumented worker. He’s from Mexico, living here illegally. His mother came to the United States when he was eight years old. She came because there were jobs (housekeeping) that allowed her to feed her two sons. They lived with other undocumented workers in a series of rundown one bedroom apartments. Now in his fifties, David went to school here, works here, got married here, and raised a family here. David has worked and virtually lived in the United States his whole life. When I look at David I don’t see an illegal alien. I see a friend, a good family man and an American. When ICE comes knocking, they won't see any of that...
In many ways David and his family represent an insoluble problem for the United States. There is simply no way that all 12 million illegal aliens can be swept up and shipped back to Mexico. Yes, they are all lawbreakers, here only because they violated our borders and broke the laws governing legal immigration. And in David’s case (like most of the 12 million), he's a vital part of the community and America's economy. 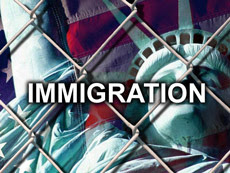 On December 12, in nationwide raids 1,300 undocumented immigrants were rounded up. 230 of those were arrested in Worthington Minnesota at a meat packing plant. If ICE (Immigration and Customs Enforcement ) had raids like this every day for a year, they would still only have 3% of the illegal population! It does nothing to control or stop illegal immigration.
Continuing down the path of enforcing immigration crackdowns will only increase taxpayer’s financial burdens (yes you pay for the raids, processings, and the incarcerations and deportation); and finally, the cost to the families themselves when social services has to be invoked in dealing with what’s been left behind or broken apart.

“Immigration raids cause more problems than they solve, the raids do not address the root causes of immigration and this is why we call for a moratorium on all deportations and raids,” said Mariano Espinoza, Ex. Director of MN Immigrant Freedom Network.

What we have currently is a system that fails to honestly address the immigration and border security issues facing this country. The raids on December 12 were an outrage that amounted to spitting into the wind, with the same net affect. 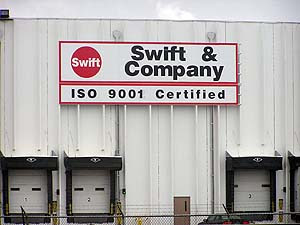 The United States immigration system is completely divorced from the real demands for legal entry visas in our economy. Take for example Minnesota which currently has a skilled laborer shortage. Couple that with the simple economics of a ruined Mexican economy where the wage differential between the U.S. and Mexico is about 11 to 1. Some studies suggest that in the agricultural sector there’s a 20-to-1 differential. And add in the passage of the 1994 NAFTA agreement which further depressed Mexican rural wages and accelerated the immigration wave.
No amount of fence building, fortifying the border with heat/motion detection, stadium lighting, infrared scopes or Blackhawk helicopters and aerial drones will stop people from trying to survive and make a better live for themselves elsewhere.
Enforcement-only measures will not stop illegal immigration. Taking less than .01% of those here illegally will not make the rest go back, stop them from working, or keep those sent out from re-entering. Again, let’s be clear, a raid like the one last week, repeated every day over the next year will only result in 3% of the illegal population being affected. Not a very good use of tax dollars or much of a deterrent. And the only message it sends is that we're helpless to address the real issues or root causes for our undocumented population.
The issues surrounding undocumented workers in this country have to do with pay inequity, human rights, and corporate greed. When we start addressing these issues in real terms then we might begin to affect change.
Posted by truthsurfer