Angel's Singing 'Get On The Good Foot'

First time I saw James Brown in person was at a show in Sacramento in 1970 at the old Memorial Auditorium. It was 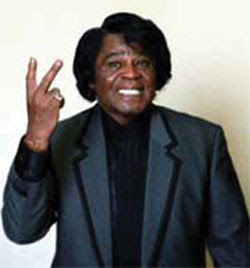 unforgetable...to this day I could re-enact the whole show...it was just that great. From the long red cape lined with white rabbit fur to the crown, the horn section, the backup singers and the loud crowd as much a member of the band as the band themselves...he earned his title of 'the godfather of soul' with his rich performances and unique vocals.

Along the way James ran afoul with drugs, booze and violence...not surprising giving the life style, background and his talent... enough said...he paid a price with time served and then was given a pardon.

A few months ago (summer) I had a dream where I went to South Carolina to meet with James Brown and do a book about him. It seemed so real... For days afterward I thought I should go just to see what would happen...a kind of dream quest. I didn't, and now more than ever, think I should have. At least I have his music... and all those #1's:

"Everyone should listen to James Brown first thing in the morning, for medicinal reasons." -Van Morrisson R.I.P.