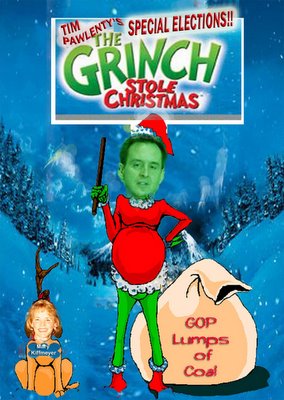 If Republicans love Democracy so much, why are they limiting voter participation?

Below is from Senate Majority Leader Dean E. Johnson

Senate Majority Leader Dean E. Johnson questioned Gov. Tim Pawlenty's decision to call a special election on Dec. 27- two days after Christmas. Pawlenty issued the order to fill the vacancies of Dave Kleis in the Senate and Joe Opatz in the House of Representatives.

"It's clear from the governor's actions that his highest priority when considering special elections is low voter turnout. It is difficult to understand someone who claims they believe in democracy and then makes decisions that ensure the fewest number of people participate in the process," Sen. Johnson said.

The 2006 Legislative Session convenes March 1. Thus, the governor could have chosen any date before mid-February which would have not coincided with the holidays.

"Gov. Pawlenty has minimized the Christmas holiday and shown a blatant disregard to our families, all in the name of partisan gamesmanship. His decision is disrespectful to the voters, university students, and the local taxpayers who must pay the election bill," Sen. Johnson said.

On Monday, Secretary of State Mary Kiffmeyer, the state's highest election official, publicly expressed concern in the rising number of special elections and said they force unnecessary costs and contribute to low voter turnout. She has proposed a maximum of four dates per year for special elections.

"I would be surprised if the governor could give the public one rational or logical reason why this date encourages voter participation. It is obvious that he wants the next elected representatives of the St. Cloud area to beelected with the fewest votes possible. He has put politics ahead ofcitizenship. Thankfully the people of St. Cloud take their civic responsibilities seriously and will respond to the governor's shallow and transparent decision accordingly," Sen. Johnson said.