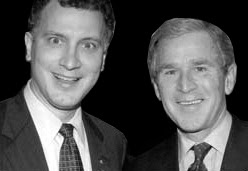 In a tie breaking vote on Friday, Congressman Kennedy voted to cut $14 billion to student loan programs and voted to cut $12 billion in Medicaid funding (Medicaid is the health care program for the poor and disabled).

What does Mark have to say?

“Washington shouldn’t have a blank check, and as a CPA and businessman I’m happy to see us act to reduce our federal deficit. This bill reduces spending in a way that reflects our Minnesota values and sets priorities. We owe it to our children to lower the deficit." (from Mark Kennedy's campaign website)

So we can give the President a blank check for an unwarranted war? And instead of rolling back the tax breaks to the richest Americans, we'll reduce the deficit on the backs of the poor and our children??? THOSE MOST CERTAINLY ARE NOT MINNESOTA VALUES!!! They sound more like the Bu$h Republican's (DeLay, Bush, Cheney, Frist, Ken Lay, etc.) values!

14 Republicans had joined a unified Democratic front to stop these cuts to the poor and children. One of them, Jim Ramstad of Minnesota disagrees with Mark Kennedy's "priorities":

"We should cut the massive pork barrel spending instead of cutting health care for the poorest of the poor, the elderly and people with disabilities," Ramstad said.

According to Ramstad, the bill could cause 6 million children from low-income families to lose health care benefits under Medicaid. He also said student loan cuts would cost University of Minnesota students $6.3 million next year. (Star Tribune Article)

In this case I totally agree with Mr. Ramstad.

You have to wonder who Mark Kennedy is really working for in Congress and who he might be working for in Senate, if he's elected (Bu$h Inc.) - IT MOST DEFINATLEY WON'T BE FOR THE PEOPLE WHO HE SHOULD BE WORKING FOR - THE PEOPLE OF MINNESOTA!!! This is proof of it!

What others are saying:

"They are targeting programs for poor people to pay for tax cuts for rich people," said Rep. David Obey, D-Wisconsin.

And again I say unto you, It is easier for a camel to go through the eye of a needle, than for a rich man to enter into the kingdom of God.
Matthew 19:24

On drilling in ANWR:

House Speaker Dennis Hastert, R-Ill., says that resolving the drilling issue will be like threading a needle.

“I wish (the needle) had a little bigger eye,” Hastert said.
Posted by memberblogger

Mark Kennedy casted the tie breaking vote... but wonder who else voted to cut funds that help the poor and our children?

Who voted NOT to cut funds to the poor and our children?

I noticed your professed dedication to truth. Have you ever bothered to research the truth of tax cuts, economics, and prosperity, or will you be sticking to meaningless canards?

Meaningless?
If you are a person living in poverty (or close to it) and your Congressman votes to cut funding to very important services which help provides you and your children with healthcare - it's anything but meaningless.

If as a child you go through schooling, graduate and now want to continue your education at a college, but find out that tuition is too expensive and there is no help for you in loans, grants, etc. - it's anything but meaningless.

The truth?
The richest Americans (1%) have received a ridiculous tax cut, while the funding for services that are in place to help our poor, children and seniors are constantly being cut. This is immoral!

If you would like to specifically question something - do so.

I have included links to the stories that I've used. Have I added my own commentary - yes. Does it change the truth, no - click on the links and read them for yourself. If you feel that something is not correct - please let me know.

Look, I agree that Congress should have cut wasteful spending and programs instead of social safety-nets. As an individual who works to restrain wasteful government spending, I was dismayed when social programs were chosen over the egregious highway bill earmarks, which I am sure you are aware of. Even as a person who looks at long-run economic consequences of fiscal, politico-economic decision-making (welfare state or no, how much, perverse incventives, etc.)I indeed believe that the largest, most powerful government the sun has ever shown upon may have some role in helping those that need it. I understand that. It is not meaningless.

However, we should be careful when we criticize tax cuts, even if the richest 1% benefit. Many the middle and lower quintiles will benefit too. The top 1% of income earners pay over 35% of total tax reciepts. That's fine. The top 50% of income earners pay nearly 95% too the bottom 50% paying around 5% (latest IRS stats--I can link it later if you want). Those top 50%, like it or not, provide the capital accumulation that keeps our economy growing. Wages and income, for all earners, are tied to this process. Rich people invest, and they need to. It's not moral or immoral. It's the truth of how a capitalist economy works.

I don't mean to bloviate, if you feel that I am. But I just wish that left-of-center pundits would take economics into account sometimes when they criticize "the morality" of economic decision-making--especially when it is so easy to rally passions against rich people. Complaining that rich people benefit from something is no substitute for analysis. Thanks, and I look forward to hearing back.

Anonymous,
I appreciate your comments.

Yes, please post the link to the latest IRS stats. It's always nice to be able to go and read the information.

My criticisms of the current tax cuts comes from the expectations that came from our President's touting of the tax cuts. And then to see that there is need for investments in many areas that taxes could pay for - i.e: our roads, health care, helping the poor, etc.

When Bush pushed for tax cuts to the richest Americans, he said that it would spur our economy and be good for all Americans (by creating jobs, etc.).

Back in August, when everyone was saying how well the economy was doing, people started getting laid off at my company. They were let go because there wasn't enough money coming in - no one was buying our products.

Over the Thanksgiving holiday, I did some reading. I ran across an article that included information from Lee Price of the Economic Policy Institute on the Bush tax cuts:
"The fact that all major economic indicators are higher today than in early 2001 does not mean the tax cuts have been beneficial. Since the Great Depression, the resilient U.S. economy has always had gains over such four year periods. The appropriate question to ask is: How well has the economy performed compared to similar periods in the past? If the last four years of tax cuts had worked as promised, the economy should have done better than in previous cycles, when taxes were either not cut or cut much less."

The EPI concluded, "By virtually every measure, the economy has performed worse in this business cycle than was typical of past ones, including that of the 1990s, which saw major tax increases."

EPI found an annual growth rate of wage and salary income of 1.3 percent, below all six previous cycles and nearly 2 percentage points below their average 3.2 percent growth.

"Business investment in structures, equipment and software ('non-residential investment') was only 3.6 percent higher in the second quarter of 2005 than it had been in the first quarter of 2001. That is less than half of the 8.2 percent growth found in the worst of the six prior cycles, and but one-eighth of the 27.5 percent growth rate in the strongest prior cycle."

After reading the information in the article and then going to the Economic Policy Institute's website, I have to wonder where the money is being invested by the richest Americans?

So I read business articles and other articles - what I found is that:
1. CEOs and Executives continue to receive ridiculous pay packages.
2. Factories and businesses continue to close down here in the U.S.
3. Jobs continue to go overseas.
4. And people continue to get laid off.

I am not against the rich. There are many wealthy people in the U.S. that truly make a difference. I just worry, with the current policies in place, how the middle class will survive.

Thanks again for your comments. I enjoy having a dialog on issues that matter.