Since 911, Americans have been asked to do a number of things, like shop more, save more, and tighten our belts in these tough times. We have also witness local, state and federal spending get slashed in lieu of deficits but through it all, one federal department has maintained and exceeded it's spending. I'm pointing a finger at the defense department... the total for defense spending in 2010 was between $1.01 and $1.35 TRILLION!

So imagine my shock and when I read that Defense Secretary Robert Gates says the Pentagon will seek $78 billion in cuts to the defense budget over the next five years . Naturally the media is calling it a surprise move and quoting Gates that it will reduce the size of the Army and Marine Corps.

In comparison to my yearly budget it would be like me reducing my yearly spending by a dollar...not too painful or significant. But wait it gets worse...there won't be any CUTS as they are actually talking virtual future dollars or as reported by the pentagon:

"Because the Pentagon originally projected budget increases for these years, the cuts won't mean that the Pentagon's budget will shrink in total dollar terms -- only that the rate of growth will slow. The fiscal year beginning this year will see a base Pentagon budget of $553 billion, up from $549 billion last year." 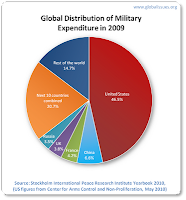 Sigh...The real surprise is that the American people haven't risen up in revolt at Gates announcement of un-cuts. Will the defence budget be less?...NO; Will there be real cuts?...NO; Is Gates playing a shell game with Americans?

Including non-DOD expenditures, defense spending was approximately 28–38% of budgeted expenditures and 42–57% of estimated tax revenues. Isn't it time we stop the out of control defence budget before their spending destroys us all.

THANKS for bringing this discussion forward … this is the third rail of politics that everyone is afraid to discuss … and we need to educate the taxpayer so they understand how much money is being wasted / spent.

I give Secretary Gates a lot of credit for pushing for some reductions even though the budget essentially will show a modest increase during the current Obama term … the concern is : will the next President hold to no increase in spending ? (or even a reduction ?)

First, the battle is Congress … just this week, Todd Akin (R-MO), the Chairman of House Armed Services Seapower Subcommittee, told a Navy audience that despite the concerns over the budget deficit, the nation was not spending enough on defense. He said they could start cutting in other areas of government spending that he said were not necessary, and maybe not even constitutional … where have you heard that before. Mr. Akin is a shill for Boeing and the only reason to invest in more Seapower spending is to protect corporate interests (who sell products overseas) … Al Qaeda does not have a Navy … money spent on drones will do more good than more ships … but more ships was on their Christmas Wishlist.

John Kline (R-MN-02) has voted for Mr. Akin’s earmarks -- which were opposed by Sec. Gates, Presidents Bush and Obama – saying that they were not wasteful government spending but instead “good jobs”. Read more here

The Republican’s Pledge specifically did not include any cuts for defense.
This makes it tough to get any reductions.

Generally, people do not want to see a reduction in military forces … yet most people do not know that it has grown under Obama. Although a significant number of our military have served multiple tours in Iraq / Afghanistan … despite this conflict that has gone on for over eight years, 560,000 uniformed personnel have never been deployed. The military is top heavy … and Gates is trying to reduce it but it will be a fight in Congress. It’s also expensive (Retirement after 20 years and a healthcare program that hasn’t seen a co-pay increase since 1995 (currently $460/year) … there a plenty of jobs that could be done by the private sector at lower costs than the military - the Defense Business Board calculates that more than 340,000 uniformed personnel are performing commercial functions.

One of Secretary Gates cuts includes canceling General Dynamics’s $15.5 billion Expeditionary Fighting Vehicle (EFV) program. On the MN Political Roundtable is a discussion including John Kline (R-MN-02) being quoted as not being happy ... although the Marine Corp is quoted as being supportative of Secretary Gates.
A little background ... EFV are used to transport Marines from sea onto land ... it is designed to roll off a Navy amphibious assault ship, move under its own power to the beach, and cross the beach and operate inland.
And it was last used in combat during the Battle of Inchon in Korea … and that was in 1950 ...

When the Pentagon says to cancel, why does Congress think that they know more ... oh that's right, the lobbyists