The Pleasure of the Invaders

The Taliban in Pakistan and Afghanistan true to it’s threat has stepped up violence in response to the recent US Troop increase. The US was hoping the Afghan tribes will become our allies

No Afghan will lower himself to such an irrational and insensitive position to fight against his own brothers for the interests of the invaders and lose his life and faith for ... the pleasure of the invaders,"

The Pakistan pro-taliban militants have made a spectacular surge in recent months by gearing up their guerrilla-style war adopting hit-and-run tactics involving remote-controlled bomb explosions, long range rocket attacks, ambushes, and the use of cluster bombs:

In one of the largest and most brazen attacks of its kind, suspected Taliban insurgents with heavy weapons attacked two truck stops in northwest Pakistan on Sunday, destroying more than 150 vehicles carrying supplies bound for U.S.-led troops in Afghanistan….

Early today, a second attack on Western supplies was reported in the same area. A security guard said 50 containers had been burned and some vehicles destroyed by rocket fire…..

Nearly a month ago, militants hijacked a convoy of more than a dozen vehicles. Then last week, 22 trucks were torched at a truck stop. The attack was directed against the Pakistan Ordnance Factories, a complex of more than 16 factories with about 20,000 workers. It seemed timed to cause maximum casualties, coming as it did during the afternoon change of shifts.

While a variety of weapons are used in these attacks the use of cluster bombs interested me...where did they get them, why use them, what do they do?...Cluster bombs as a weapon contains multiple explosive submunitions. When the bomb break open in mid-air, they release the submunitions which cover an area the size of several football fields, hurling small fragments through the area killing and maining anything in their way. Unlike "smart bombs", the weapons that delivers a single bomb with pinpoint accuracy, cluster bombs are by their nature imprecise and designed to hit targets spread out over a wide area. Some cluster bombs are coated with DU (Depleted Uranium ) making them toxic as well as more deadly.

Some of the uranium used with DU weapons like cluster bombs vaporizes into extremely small particles, which are dispersed into the atmosphere where they remain until they fall to the ground with the rain. As a gas, the chemically toxic and radioactive uranium can easily enter the body through the skin or the lungs and be carried around the world until it falls to earth with the rain.
Cluster bombs create an unhealthy environment during war for any civilians...A third (1 in 3) of the casualties (victims) are children. 60% are non combatant (civilians). And factor in using chemicals like DU, and even the soldiers regardless of which side they are fighting on can become sick.
Today, more than one out of every three veterans from the first Gulf War are permanently disabled. Terry Jemison of the Dept. of Veterans Affairs said that of the 592,561 discharged veterans from the 1991 war in Iraq, 179,310 are receiving disability compensation and another 24,763 cases are pending.

The "epigenetic damage" done by DU has resulted in many grossly deformed children born in areas such as southern Iraq where tons of DU have contaminated the environment and local population. An untold number of Americans have also been born with severe birth defects as a result of DU contamination. 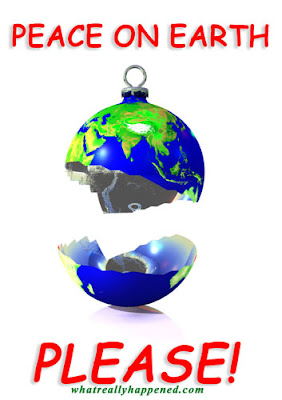 Many of the cluster bombs don’t detonate and like land mines, they can kill unintended victims years later (as opposed to unintended victims they day of!) As the bombs are scattered and used to a great extent indiscriminately, they aren’t mapped or disarmed after-the-fact. Still cluster bombs continue to kill years after they were used. Even today, decades later, many in Vietnam are still mained by such munitions.

These unexploded bombs are now used by the Taliban and used against us. In addition, they run several weapons plant and when captured, the Taliban often carry high-tech radio equipment, and are even wearing new sneakers, all signs they have found new financial support. In addition both the Taliban and Jaish have weapons and arsenal which have piled up in the past several decades of war. And they brag of having weapons for centuries to come (sound familiar?)

Given the deadly legacy you would think instead of supplying bombs the U.S. would promote a global treaty, but we haven’t. More history on this at The Daily Clarity. So how did these cluster bombs fall into the Taliban's hands? Well, besides old Soviet stockpiles, weapons dealers, and sympathetic countries, many were tinkered from what we dropped but wasn't exploded. The truth of the matter is, the U.S. has set a deadly example that the world is now following.
Instead maybe it's time to drop food aid, education, medicine and infrastructure. Let's introduce them to use those weapons instead.
Posted by truthsurfer