Welcome to Truth Surfer's first Tough Question! This is the first in a series of tough questions posed to various candidates.

I'd like to begin with a disclaimer (yeah, I know - A disclaimer? I just want to make something clear):
I am not officially endorsing anyone with these posts. The purpose of the posts pertaining to the 2nd CD race is only to stir thoughts and conversation.

Congratulations Peter Idusogie! You are the first candidate to get the Truth Surfer's first ever "Tough Question".
Let's get TOUGH! Ok it doesn't have the same ring as "let's play hardball"... 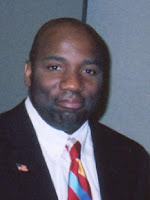 I like Peter Idusogie, but something is bugging me...

I'm struggling with Mr. Idusogie's candidacy. So I'd like to pose a question to him:
Are you an independent (with a small "i") or a DFLer (Democratic-Farmer-Labor)?

Let me state before you answer - I mean no disrespect with this question.

Here's why I am asking (the background information):

2004 - Peter Idusogie runs for DFL endorsement in the Second Congressional race. His DFL opponent at that time was Teresa Daly. Ms. Daly gets the endorsement.

2006 - Peter Idusogie runs for U.S. Senate as an independent (small "i"). He doesn't get enough signatures on petition to be included on ballot. He is running against DFLer Amy Klobuchar who ultimately wins the election.

I like both Peter Idusogie and Steve Sarvi - either one will make a great congressman for the 2nd CD.

But I would like Mr. Idusogie to answer the following:

1. Are you truly a DFLer? (will you represent the DFL's platform if elected?)

3. What color do you like: red, purple or BLUE?

Ok, I know there’s more than one question here… Because it’s our first edition of “Tough Question” we’ll give you bonus points for answering all 3 questions.

Thank you Mr. Idusogie, in advanced for the answers.

Why don't you really ask Peter the question and let us know the answer. Either that or rename the post 'Virtual Dreaming'.