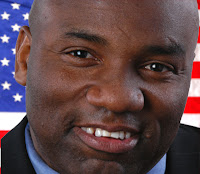 Peter Idusogie, candidate for Minnesota Second Congressional District DFL's endorsement, had a busy Saturday. He spent most of his day at a county convention, where he gave a passionate speech and worked the crowd. Peter has a nack for "Retail Politics" and he showed what REAL retail politics is when, after the county convention, he made his way up to the Burnsville Center. Peter along with two campaign volunteers walked the mall talking with anyone and everyone who would stop and talk with him.

He stopped and talked with a group that wanted a picture with him. He visited with a cell phone sales person and made his way to a clothing store. He demonstrated a great understanding of retail politics and people were drawn to him.

Peter hasn't had his campaign running for long, but showed in one day that he could garner support from both DFL activist and the general public.

Peter is running against Steve Sarvi for the 2nd CD DFL's endorsement.
Posted by blue fortitude

To beat John Kline and the oil, business, and insurance industry allies he has accumulated, the DFL Party needs a candidate that is organized and serious. Steve Sarvi has been traveling the district, talking to voters, and gaining valuable endorsements such as the one from Tim Walz, and recently multiple union endorsements. While Peter spent most of his day at the Rice County Convention in Northfield and then traveled to a mall, he neglected the convention at Burnsville City Hall. Steve Sarvi decided not to important aspects of the campaign and appeared at both. Sarvi has won elections in the past, as Mayor of Watertown, MN and city administrator in Victoria, Lanesboro and Watertown, MN. He has the experience and support that Peter lacks. Steve Sarvi and the organization he has developed, is the man to beat John Kline, and the party must unite around him.