Congressman John Kline, Second Congressional District Republican't, must be nervous and worrying about his re-election. How else do you explain that with 19 months before another election- his campaign signs are already going up...say isn't that illegal? This one was on McAndrews- can't miss it- it's the only election sign up! 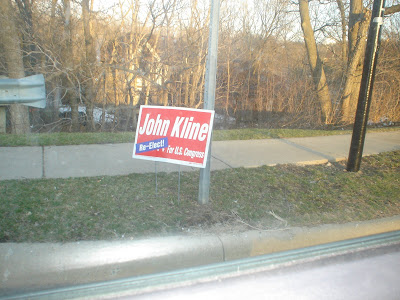 And say, doesn't it have to be on the other side of the sidewalk.

Ah well, I didn't expect better of from Kline, Kline's staff or his supporters. Typically they don't see the laws applying to them. And truth be told, they have reason to be worried. Kline has become the poster child for the Bush Administration and the failed Iraq War. The 'stay the course' with a sinking ship really isn't reasonating with the voters. There have been too many lies ("failures of intellegence' as Kline calls them) and too many mis-steps. Leadership is either successful, or it needs to be replaced. So far this year John Kline has been on the losing side of almost every congressional issue, his views are radical and closely aligned with the neo-con nuts...so yes Kline has reasons to be worried.
Posted by truthsurfer