Shopping at the Mall?

So I went to the Burnsville Center this afternoon around 4:30 pm to do a little walking and a little shopping. Guess what, I wasn't the only one there interested in shopping... 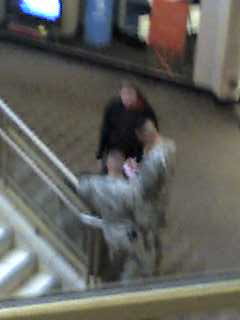 I know the pictures aren't the greatest, but yes it's two army recruiters. I first noticed them talking with one teen who was all by himself, then I decided to just follow the two recruiters around the mall as they approached various teens.

The two recruiters got into a little trouble prior to talking with the teen pictured. One of the kiosk's owners contacted security when he saw the recruiters bugging one teen on the lower level. The security guard caught up with the two on the upper level right off of the escalators. 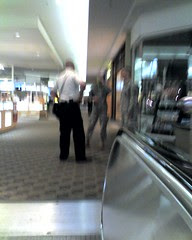 I call this photo "the Uniformed".

Latter they decided to try their luck on the lower level again... that's where they met the teen pictured above (after their little discussion with security).

As they talked to the teen pictured another security guard caught them in the act of solicitation...

and off they went, with the now interested teen... 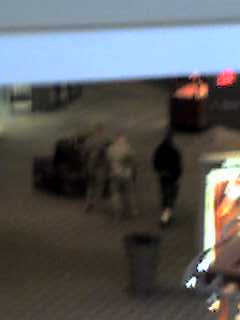 So now parents have to worry about having their kids sign up for the army while on a shopping trip to the mall. Go figure!
Posted by blue fortitude

This is outrageous...I now need to warn my teenager about strangers and the military recruiters...