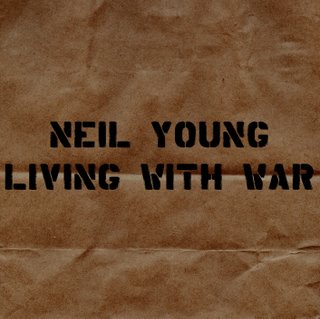 Neil Young has always been a maverick politically as well as musically. Although he has recorded a few songs that drew cheers from liberals, such as "Ohio" and "Southern Man," he also drew criticism from the left for pro-Reagan comments many years ago.

Now Neil Young is weighing in with a soon-to-be-released album that urges, “Let’s impeach the president -- for lying.” featuring a rap with Bu$h’s voice set to the choir chanting “flip/flop” and the like. more here and here.

According to film director (heart of gold) Jonathan Demme at JamBase,

It is a brilliant electric assault, accompanied by a 100-voice choir, on Bush and the war in Iraq... Truly mind blowing."

"The album, with Young on Old Black, Rick Rosas on bass and Chad Cromwell on drums, took three days to finish."

Howie is a personal favorite of mine and former president of Reprise Records and life long committment to being a hippie. I highly recommend you visit his blog for more information. Also visit the newly minted blog: Living with War.

Look I know I'm sounding like a rabid fan... but I'm also speaking as someone in need of more protest song escapes from this current administration. It won't be long before the wingnuts attack Neil for using his genuis for song. To that I say...thank g*d and may many more artisit, musicans, and poets follow in Neil's footsteps.