The Minnesota Chamber of Commerce would have you believe that women being paid equally is both an 'outdated' and 'unnecessary' thing? Hmm...so it's okay to pay women 67 cents for every dollar paid to men doing the same job with the same experiences and background? ...Think again sexist jerks!

What is outdated is the belief that without laws women won't continue to be discriminated against in the wage earning market place. When the first federal law was enacted on wage equity, women earned just 59% of the wages men earned. That disparity has improved over the years (decades) to around 80% but there still a ways to go. Follow this link to see women's earnings over the years compared to men's earnings.

Yes women have made progress in the workforce but that is because of the laws. The fact remains that decades later, the goal of equal pay has still not been realized. In the last year, women in 20 states have actually seen the wage gap widen! Factor in that 40 percent of women working are the primary earners for their families, and we see more and more women slipping into the working poor. The need is even greater today to ensure that women are protected by fair and equitable earnings. 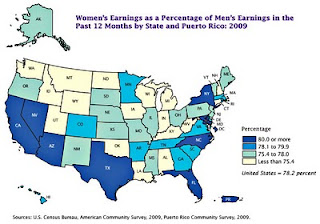 The map below shows how each state fares when it comes to gender equality in wages. The Minnesota Chamber of Commerce position on this issue shows a total disregard for the facts regarding pay inequity as well as the welfare of Minnesota families.