In Wisconsin, They Want The Whole Enchilada

One of Scott Walker's first action as the newly elected Wisconsin Governor was to post signs along the Wisconsin/Minnesota borders, saying Wisconsin was 'open for business'. Now two months later, residents are seeing first hand how very prophet-like that single action was to their futures. Governor Walker has put the state of Wisconsin up for sell to big business at the cost of it's independence and workers souls. 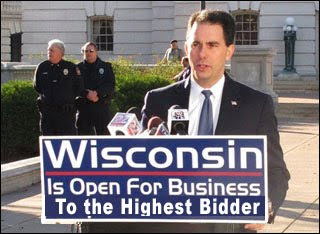 The question is why Walker would trade the State of Wisconsin away to thugs and thieves? My mama always said to 'connect the dots' and 'follow the money' to find the answers..easy enough to do in this instance.

The dots lead to the Koch Brothers who have contribute billions to libertarian and tea party candidates like Wisconsin Governor Walker. They are dedicated to preserving their rights to make billions by exploiting and endangering workers while poisoning the air we breathe. In political circles their ideological network is even referred to as 'Kochtopus'. What's going on in Wisconsin is a power grab by the Brothers with their puppet Walker's assistance. If they get their way, the state of Wisconsin will become the next Koch Brother subsidiary.

Unfortunately 'what happens in Wisconsin won't stay in Wisconsin'. Being next door neighbors, events going on right now are effecting Minnesota. For example, Scott Walker's decision to cut funding to the high speed rail, brought to a halt funding plan's for Minnesota's high speed rail system connecting St. Paul to Chicago, with links to Duluth, Fargo, and other cities. In addition the brutal attack to break collective bargaining and union employees representing Wisconsin public employees is being cheered on by the leaders of America's far right political fringe groups dedicated to doing the bidding of the wealthy and big corporations. As Wisconsin goes...so will Minnesota...

Mama said a lot of things that were wise...she also taught me not to play along if it's wrong...and what's going on in Wisconsin is wrong...so here's the deal...

While it won't have the same impact of paying billions to a lobbyist group to change legislation and get their puppets elected to office like the Koch Brothers have done in Wisconsin, but it's a start point...