TPaw 2B The Next US President?

A Gallup Poll released earlier this week showed support for Republican presidential hopefuls. In it, Minnesota Governor Tim Pawlenty is tied for sixth with 4 percent. That's an improvement from June when he was tied at 2% with 'none of the above'!

Currently the four clear front-runners are : Mitt Romney, Sarah Palin, Mike Huckabee and Newt Gingrich. Each has 80% name recognition among Republicans, and they are about 10 points ahead of any other candidates in trial heats and polling that have tested various combinations of the candidates against one another. 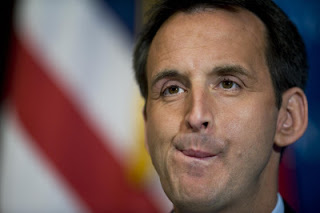 In general terms, Pawlenty lacks a strong national profile but could emerge as competitive candidate if he can gather support away from the front runner Massachusetts Gov Mitt Romney who is at 19 %.

Currently Tim Pawlenty is seen as being fourth in terms of the political futures market InTrade, the current “power ranking” according to the National Journal’s Hot Line which uses the average standing in five recent polls of prospective Republican primary voters and favourably ratings among Republican adults according to the recent A.P.-G.f.K. survey.

However, given that a vast majority of Minnesotans would probably not vote for Republican Gov. Tim Pawlenty for president even if he won the 2012 presidential primary, Timmy has a steep if not impossible incline to climb if he wants to be the next US President.

Pawlenty belongs to a Baptist General Conference Church, the Evangelical Christian Wooddale Church in Eden Prairie. Perhaps they will do commercials much like the Mormons do in bolstering understanding of his religion? Will it be enough?

At this stage, it’s too early to presume that Obama will be re-elected. The old adage of “Don’t change horses in midstream” may not be true this time. Obama should do well in the popular vote, but the President is selected by the Electoral College that will be impacted by the census … there are more states that should favor the Republican nominee (Texas could get four seats, Florida two seats, Arizona one, Utah one, etc … while Massachusetts (which has all Democrats in the House) will lose one, as will New Jersey and Illinois while New York will lose two … this makes the Electoral College extremely relevant in 2012. If Obama doesn’t find a way to address spending, it looks bleak. {And when I say “address”, it’s critical that he controls the dialogue … something that the White House did not do on the stimulus, healthcare reform, etc.}

Although we don’t know who the Republican team will be, let’s divide them into three camps.
#1. The TV hosts … Huckabee and Palin. IMO, both are enjoying the ease of just being a flame thrower rather than actually participating in the governing process.
#2. The experienced legislators. Gingrich and Pence from the House and Thune from the Senate. Ron Paul is in his own group. (Yeah, Gingrich could go into the TV category too.) Gingrich has strong name recognition … heck, he won the 2007 MN-GOP poll when he was still on the sidelines. Gingrich is too wacky for me but he talks with authority … knowing what buttons to push. Pence is just another in a long line of House members who have tried (Duncan Hunter and Tim Tancredo last time). Thune has good conservative credentials, but being from South Dakota, he has virtual no name recognition. Thune will have problems since he is currently in the Senate (and will need to be there for filibusters) and won’t be able to pull a McCain and just abandon his day job.
Ron Paul is the wildcard. He will have strong grassroots support … especially in TEA Party strong states like Nevada and South Carolina … but in the end, the Corporate-types and RNC really won’t want to support him.
#3. The Governors … Pawlenty, Romney, and Barbour. Here is where the nominee should come from. Barbour can take credit for all the Governors that were elected this month as he was head of the Republican Governor’s Association and they spent plenty of money getting their candidates message out (including money for Tom Emmer.) Barbour has the insider’s edge as the former head of the RNC and strong southern support … but my guess is that he really doesn’t want the headaches of being President.
That leaves it to a battle between Pawlenty and Romney. Romney had one term with the most notable accomplishment of passing healthcare legislation … while Pawlenty had two terms where he was known as Governor Veto for defense of tax increases. On the surface, this gives Pawlenty the edge. Next, the battle will being run by the moneymen … Pawlenty has in his corner his Swift-boat buddy Bob Perry while Mitt Romney currently has the Koch brothers. In the end, I suspect that Kochs’ will find Pawlenty to be acceptable … after all, they already know him from their Minnesota business.

The key is not that Pawlenty is polling in such low numbers by the masses, but instead that he is number 2 on the Hotline listing. That’s the money players. The 2010 elections changed on June 19,2009 when the House approved “Cap and Tax” legislation … and when the Supreme Court ruled in Citizens United, the money players took over. Let’s remember that besides Pawlenty getting private money, Norm Coleman was a major player in 2010 elections with his American Action Network. Pawlenty probably also has an asset in Vin Weber (although Weber was on Romney’s side in 2008.)

Remember that the primary format has changed for the Republicans … no longer will there be a winner-take-all Florida primary that effectively clinched it for McCain and killed Romney. The season is later … with Iowa up first … while Huckabee (or Palin) would be strong if they ran, Pawlenty was smart when he cuddled up to Bob Van Plaats and the Iowa Family Policy group with his comment that voters had the right to reject judges if they don’t like the same sex marriage rulings. Romney spent a ton of money in Iowa for 2008 and didn’t win it … this time Pawlenty could steal it from him. Romney should get New Hampshire and Nevada but South Carolina would be the first time that they go head-to-head … even if it’s a draw, they will both share some delegates --- BUT Ron Paul could end up being the overall winner in South Carolina.

IMO, Pawlenty will win in the long run.

BTW : Pawlenty was raised a Catholic and then rejected the faith … I wouldn’t worry about the Mormons … Pawlenty should worry about true Catholics that never forget those that reject their faith.