Day: T Minus One

Thankfully, I'll be taking the next few days off to eat turkey and sit mindlessly in front of the big screen TV if not actually sleeping..my life is great and I've got at least 8770 reasons to say so!

I can't blame the turkey for causing the drowsiness associated with eating a large Thanksgiving meal. Studies show it's the large, carbohydrate rich meal rather than just the turkey that releases tryptophans in the brain causing drowsiness after eating... 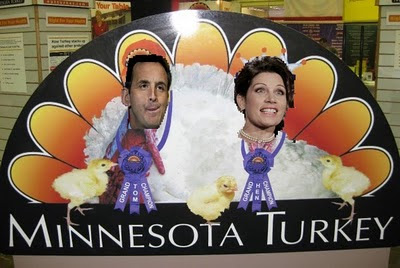 About that turkey...I got a fresh, locally grown, organic turkey...did you know Minnesota raises more turkeys than any other state?...An estimated 45 million turkeys will be eaten tomorrow (or 675 million pounds of turkey!) and most of them came from Minnesota.

Starting with Harry Truman in 1947, the National Turkey Federation has presented the U.S. President with a live turkey in celebration of Thanksgiving. Each year, the live turkey is “pardoned” by the president and most recently has been flown to Disney world to serve as the grand marshal of the Disney world Thanksgiving Day Parade. Although I hear the 'pardoned cranberry' (turkey) may run for office in two years!