They Mostly Come Out At Night....Mostly...

To use the word 'Integrity' and 'Minnesota Majority' in the same sentence is something of a paradox. This group might find a few voter issues but to characterize it as being widespread or pervasive in Minnesota is a joke. It's like using a stick of dynamite to blow up one pesty house fly.. 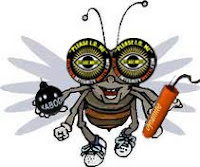 This very small problem (estimates are less than half a percent statewide!) has creased to be voter fraud but instead is now their over the top thuggery reaction. To use their own emailed words ...

"This is just another example of "government [teabagger wingbat ahole brown shirts Minnesota Majority] gone wild" with exercising authority not granted to it by our laws or the Constitution".

Don't confuse their over reactions with CIVIL disobedience! Their interfering intimidation, and gestapo like tactics with the American elections process is meant to cause voter suppression which harms us all.
Posted by truthsurfer

Love the 'Election Watch' mascot. Can't wait to swat it dead...now where is my rolled up newspaper!