Minnesota's biggest loser Tom Emmer said at his news conference today... 'it taint over till the fat voter sings'...er or something like that....sigh, remember when news conferences actually had news facts instead of innuendo, lies, and misinformation.

In the Franken/Coleman recount, after going over each ballot by hand and through 3 courts, the fraudulent votes came 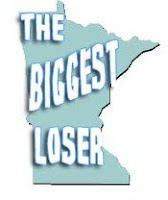 to .00006 percent! BTW Jay Weiner has a nice reply to Michael Thielen's post regarding it's inaccurate information on the Minnesota recount...what is it with outsiders wanting to paint a total public, legal, and transparent recount system in Minnesota as a conspiracy when 'their' horse in the race comes up lame?

In addition, if you work with numbers, while not entirely impossible, Emmer would have a better chance buying a lotto ticket for his next big windfall than waiting for 40 times more changed votes than the 2008 recount. Even Coleman's attorney says the fat voter sang for Dayton!

My favorite moment is when Emmer blamed the media for his lost in a Republican year... "Poor reporting; I think that was it."

Yeah that's the ticket, be a stand up official and blame others (Emmer excuse generator)...who did vote for this clown? Ah must have been all those millionaire waitresses. But they will drag this out until the bitter end, how else can they keep a GOP ex-governor in place while they enact their agenda. Is this the intent of the voters? I don't think so.
Posted by truthsurfer