Why Continue The Failure?

"Roadside bomb attacks on American troops in Iraq reached an all-time high last month [July 2007], accounting for more than one third of all combat deaths."

"The distribution of unidentified bodies found dumped in Baghdad between June 18 and July 18, 2007.' 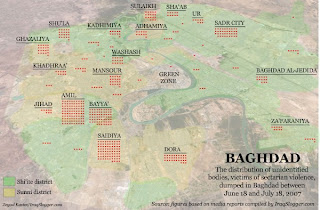 My question is....why? Failure is to continue and not learn from our mistakes. Iraq War = Failure.
Posted by truthsurfer