This is a story about a den of poisonous snakes striking each other with thier deadly vemon after a dismal showing last election. They attack each other personally (sound familiar?) rather than address the underlying reasons for losing their base of support. As usual they increasingly demonization anyone that doesn't totally share their beliefs or views... including their own!

"...The truth is, I was offered the position as the National Chairman for Veterans Outreach for McCain 2008 not State Chairman for McCain. I turned down the offer because of the despicable condition the Minnesota Party is in following a greatly mismanaged and poorly executed election in 2006….And unlike my competition for Party Chair, I will not attack the qualifications or integrity of any of the Republican Presidential candidates." 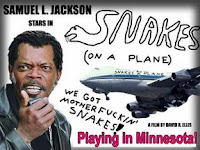 We all realize that while proclaiming to not attack, Joe's attacking. How silly of him to think we don't realize 'despciable', 'mismanaged' and poorly executed' are attacking words! Makes you wonder if he's behind the leaked memo?
Naturally there’s talk of this being part of the Stribs liberal political agenda (yeah like they mismanaged GOP money?!) and accusations abound including the wild ass thought that Andy would pick the law over the GOP party! These glossy GOPers, there’s always more than meets the eye. Sure it's a pretty picture and nice teeth but where's the flag and family?
This has all the markings of a good mini-series. Naturally I won't ruin it by telling you the ending but let's just say 'they get what they reaped'. The cliff notes for this rant are posted up at The Fruit Fly (no link out to Truthsurfer- but so be it!).
Coming soon, Snakes in MN I and II...
Posted by truthsurfer