Pawlenty’s vetos this session have done nothing other than block the fiscally sane management of our state, interfered, delayed or depleted funding of needed programs including transportation, killed federal matching monies, put cities at risk next year, and now will let our property taxes fill in the funding gaps! 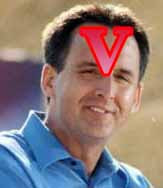 Surely Pawlenty now has the honor of being the most irresponsible governor in Minnesota’s history. Why does he hate Minnesotan's so much?

From WCCO: Moorhead City Manager Bruce Messelt said because of Pawlenty's veto, Moorhead will not receive $2.9 million in local government aid it was hoping for. Messelt said that money is used to provide police and fire protection, run the city library and fund local park and recreation programs.

From Niel Ritchie: Governor Pawlenty’s veto of the tax bills slammed the door on $462 million dollars of property tax relief for Minnesota businesses and homeowners this year. That is especially bad news for Greater Minnesota residents, who bore the brunt of the Governor’s cuts to schools (9.9 percent) and local government aid (30.9 percent) during his first term.

From Cook County News-Herald: Late last Wednesday, Pawlenty sent a letter to Speaker of the Minnesota House, Margaret Anderson Kelliher, informing her that he had vetoed House File 2268, Chapter 149 — the Omnibus Tax Bill. In so doing, he left the Ham Lake Fire victims and Cook County local governments high and dry. Not to mention the tourist industry’s sales and lodging taxes and the North Shore Hospital and Care Center, and much more.

From Austin News: Chances for modest property tax relief for homeowners from the 2007 Legislative session died Wednesday, the victim of Gov. Tim Pawlenty's veto pen and a dispute over including inflation in the state's budget forecasts.
Posted by truthsurfer