Where are the jobs that the newly elected Minnnesota House and Senate promised us? We've had lots of legislation on limiting our freedoms, but no job creation!

On KARE 11 this morning, they touted McDonald's hiring a new 50,000 Jobs about 50,000 times over (world's longest free commercial?)...they forgot to mention that while McDonald doesn't post their pay (embarrassed?) and it varies from state to state...overall, they offer minimum wage entry level McJobs.

With few exceptions, McDonald's McJobs don't offer positions that provide a living wage. A living wage is the hourly rate that an individual must earn to support their family, if they are the sole provider and are working full-time.

The hiring of 50,000 at McDonald's is typical in the lead up to the busy summer months. "Our total hires are similar to past years, but the goal of hiring 50,000 people in one day across the U.S. is unique," McDonald's spokeswoman Ashlee Yingling. In other words, they are trying a new marketing ploy and having the news media fall in line in promoting low paying, no future seasonal jobs...after all, what's more important to them, good paying jobs with benefits, or the corporate sponsorship of McDonald's? 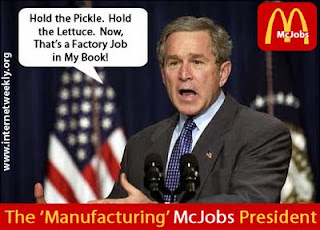 BTW, for reporting purposes, each job McDonald fills counts as a manufacturing job...no really, while Bush was in office he changed the definition, so low paying service positions at McDonald's such as burger flipping and putting pickles on a bun are now classified as manufacturing jobs.

Yes, we all know the necessity of creating jobs...but let's get some real employment going with living wages, benefits, advancements, and skill building...not more McJobs. We aren't going to grew the American economy with more McJobs.... no matter how hard McDonald sells this, it's still part of the problem and not the solution.

While the environment melts down around us, we can't find enough jobs to put Americans to work, more and more of our citizens are missing mortgage payments, so thank gosh Arizona passed a bill to make sure that a bon fide US citizen is running for President and not some ah shuck muslim black guy...whatever...How do we know Arizona is really part of the United States? They seem extremely dumb and more than very south. Has anyone seen their paperwork?