Mike Parry, MN GOP endorsed candidate for the special election in Senate District 26 seems to share the same traits we see in many right-wing extremist these days: bigoted, racist and anti-gay, ignorant of facts, willing to lie and taint others, and paranoid.

Then instead of taking ownership of his disturbing tweets... Parry tries to have them disappear (scrubbed from this Twitter account), then offered a half hearted excuses for his offensive statements, 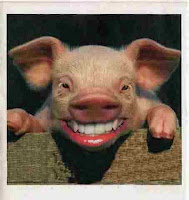 then says he wouldn’t know how to ‘scrub’ tweets. When asked if someone had
erased the posts on his behalf, Parry said there are people who know his password but he had ‘no clue’ about who it would be.
So the question Minnesotan voters in SD26 have...Is this ‘clueless’ extremely offensive guy the one to represent you? I’m sure there are other bigoted, racist, stupid folks that will continue to support and vote for Parry…but most Minnesotans don’t hold with his extreme lack of values. Today the DFL is asking for Mr. Parry to answer some specific questions…maybe he’ll tweet the responses but this time with lipstick....