Taxpayer League President Phil Krinkie isn't fit to take out the trash. He is not a conservative..just another radical loud mouth that talks trash without any factual information or realistic solutions to issues...He advocates the selling of the American way of life and it's government in exchange for a few more tax dollars in his pocket. Want proof? Minnesota 2020 has Phil trashing special education and public schooling. 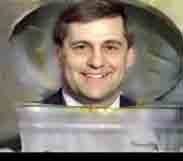 On a personal note, I have a beautiful and uniquely talented child in a public school special ed program. She loves learning and her teachers and school. She is a joy to be with and brings happiness to everyone around her...when I read what Krinkie had to say regarding Special Ed, I realized that he was a mean spirited thug who believes that all public funding is a waste...that same mentality that doesn't want to adequately fund public transportation so bridges start to fall down....

I would offer up that if Krinkie doesn't want to exist in a society that helps and provides for the young, disabled, elderly or have a government that exists for the general good and welfare of the public, he think about leaving America for a third world country that won't take his tax dollars...nor will it aid, provide assistance or have an government infra-structure. Beside being an argument regarding tax dollars, this is also one that reaches into the ethical and moral obligations of a community. An obligation that Krinkie would dump in lieu of his wallet contents.
Posted by truthsurfer