The Rights Of Women 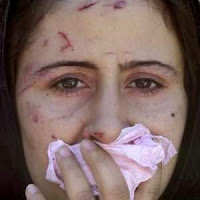 While the Bush administration is now touting success in Iraq, last month alone over 50 women were killed. The deteriorating plight of Iraqi women has been ignored as pressure has been applied to the media to not cover the issue often referring to it as ‘a cultural or internal issue’. But the reality is abduction, rape and murder are the punishments for any woman under the guise of the new Iraqi 'democracy'. That despite his atrocities and failings, Saddam Hussein ran an essentially secular government that gave women more educational, professional and social freedoms than does the current regime. In other words, women are victims in the new Iraqi 'democracy'.

There is growing pressure and violence toward women to adhere to strict Islamic laws in Iraq. Instead of liberating Iraqi women, the United States has driven women deeper into poverty, despair and danger. Iraq's women live in terror of speaking their opinions; of going out to work; going to school; or defying the strict new prohibitions on dress and behaviour applied across Iraq by Islamist militants, both Sunni and Shia. They live in fear of their husbands, too, as women's rights have been undermined by the country's postwar constitution that has taken power from the family courts and given it to clerics. 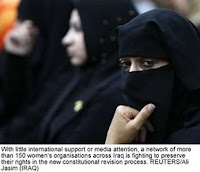 But the plight of women is not limited to Iraq. The current administration has ignored human rights issues regarding women through out the world. The latest being with Bush’s good friend and ally Saudi Arabia. By law in SA- women are subject to numerous restrictions, including a strict dress code, a prohibition on driving and a requirement that they get a man's permission to travel or have surgery. Women are also not allowed to testify in court unless it is about a private matter that was not observed by a man, and they are not allowed to vote. So it was by no surprise when a gang raped victim was sentenced by court to punishment.

If you’re not outraged you’re not paying attention… Hillary Clinton was a hundred percent correct when she said it’s time to start including women when we speak of basic ‘civil rights’ or human rights around the world.

"I urge President Bush to call on King Abdullah to cancel the ruling and drop all charges against this woman. As president I will once again make human rights an American priority around the world."

A state department spokesman on Tuesday called the verdict "astonishing", but said it was not its place to call for the ruling to be changed. No, I guess it would be wrong to expect this administration to stand for the rights of all citizens!