I like my potatoes fully loaded...butter, bacon bits, sour cream, chives, salt, pepper, even a little cheese...such is the things that dreams are made of...Minnesota's own favorite wack case, world teabagger queen and soon 'to decide' Presidential candidate...Rep. Michele 'Ms. PotatoHead' Bachmann is velling about the federal government (yes again...sigh) proposal to limit the use of

She's right it doesn't...nor does it limit setting standards/safety/health in any of the following industries: education, medical, construction, flight, agriculture, manufacturing...but that doesn't make regulation wrong, immoral, against the government or more importantly against the public good. It's done all the time for the good of all.

In this case...our kids are fat...they got that way for a variety of reasons from the sedate life styles of TV, vidoe games and online social networking to poor food choices. According to the U.S. National Survey of Children's Health, the obesity rate among children grew from 14.8 percent in 2003 to 16.4 percent in 2007 with estimates now being as high at 25% ! Replacing potatoes with vegetables won't help the potato industry, but it will cut down on unnecessary starches in school lunches by setting a better menu replacement. 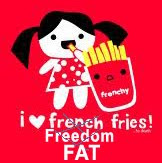 "The proposed change is part of a push to make school meals healthier, with more nutrient-rich vegetables and fewer French fries. Under the USDA proposal, school cafeterias would have to limit starchy vegetables such as potatoes, corn, peas and lima beans to a total of one cup per week for lunch."

The National Potato Council has started a "Tell USDA to Keep Potatoes in Schools!" campaign. The Council calls the spud affordable and "kid pleasing," adding "familiar shapes make lunchtime fun." Hmm, that may be so, but when did fun and pleasing become the benchmark for school lunches? If that was the case we would include candy cigarettes for dessert!

Besides, where does it say in the constitution that government shouldn't make school lunches more balanced and healthy? Here's a lesson for the newly animated talking Michele 'Ms. Potatohead' Bachmann...Elected officials should look out for the interest of our children's health over the potato lobbyist.


And yes I know it doesn't say that in the constitution either, whatyathink I got mash potatoes for brains?