Why Does Norm Coleman Get Special Treatment From NWA

Friends of mine came back from Las Vegas last Friday...NWA flight 202 at 4:45 PM. They saw that ex Senator Norm Coleman was also traveling back from Vegas on the same flight.... But, Norm didn't have to wait in line or go through the same gate or get checked through security like everyone else. As soon as Norm appear at their gate, a NWA attendent ran over and opened a separate gate that only Norm got to go through...no checking of carry on baggage, no scrutiny of his ticket or id, no waiting in line, no following of any security protocol or procedures..must be nice...wonder why? Oh, did I mention that Coleman did pose with them for a picture?!

I could excuse airline personnel wanting to get a picture or two with him, but not following the same security guidelines as the rest of us? Is that protocol with NWA, TSA, Homeland Security...Is it security for all...but Norm Coleman? Who else gets special treatment? Why? Where does it spell that out in the federal laws? 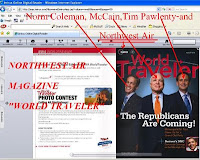 Designer suits, first class seats and now special airline treatment where he doesn't have to check in and go through security with NWA. Hmm....wonder if GOP recount money paid for his first class tickets? Or perhaps his friends, or maybe NWA since they seem to think the federal laws and rules don't apply to Norm Coleman.
Posted by truthsurfer