In recent months I've been juggling work, friends, politics and a terminally ill family member. It's been stressful most the time and sad all of the time. But it brought home our need for elected officials that will fight for the basic needs of every Minnesotan. Our economic security shouldn't be jeoparized when a family member is ill. The health of families is the health of the community and ultimately the state and country. 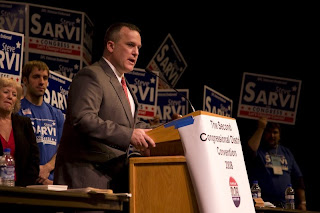 Healthcare is a necessity, education is a necessity, and transportion is a necessity. Without these basic needs met, no-one has security.
Steve Sarvi gets this. As the endorsed second congressional district candidate he'll fight for our basic rights. Sarvi knows that it's not enough to say you support service men and women, you have to show it by voting to fund their benefits. He knows that for each dollar spend in early childhood education, there's a seven dollar pay off later on. He knows that bridges shouldn't fall down for no reason.
Support change, support Steve Sarvi.
“... in Minnesota, there are certain things we just don’t do. We don’t leave our children a country and a world that’s in worse shape than when we inherited it." -Steve Sarvi, May 2008